A couple of months ago, we shared an early look at an impending Play Store update that saw more "materialized" content listings, but the rest of the interface remained largely unchanged. The new, more image-focused interface made thoughtful use of increased white space and introduced some really fun tablet layouts for content listings from movies to books, music, and apps.

This time, we have an early look at the Play Store's upcoming 5.0 release. Before we get started though, it's important to stress that this is an early look - probably a work in progress. As with all leaks or rumors, anything can change, but this will give us some idea of what's coming for the Play Store's design.

While the changes in the previous Play Store update focused on content listings, this update will focus on bringing a touch more "material" to the actual store fronts for Movies, Apps, Games, Music, Books, and Newsstand. The changes definitely aren't major, but they bring the app more into line with Android's L release (when is that dropping, again?) with fun visual treats and refreshed toolbars.

In fairness, the Play Store was already pretty close to falling in line with Google's latest design vision. Its flexible, adaptive card-based interface already carries out the metaphor of paper-based interface elements, but certain visual aspects were missing. Not all of those pieces (like buttons) have been put into place just yet, but it's a step in the right direction.

Let's start big and work our way down to the details. Here's a quick comparison between the current Play Store and version 5.0 as it stands now. Old versions on top, new on the bottom.

The most obvious change here is the color palette. Drawing from Google's new Material Design palette, each section has new colors that are brighter, more vivid, and more integrated into the design, with re-colored buttons and accents, and a colored toolbar that extends down to the re-styled category tabs.

But the visual changes don't stop at the front page. Some promo pages that are left barren in the current Play Store have received a facelift with similar visual treatment, putting a bigger focus on hero images and color blocks, and slightly revising the appearance of associated content. The most notable example right now is probably the Play Store's Antenna Sampler. 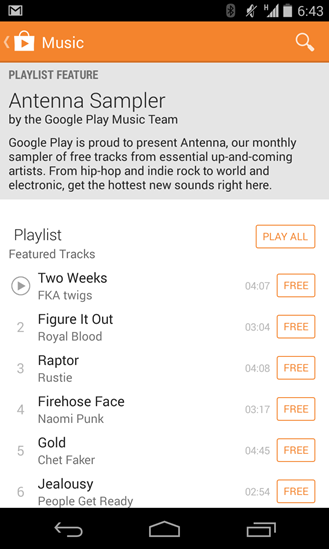 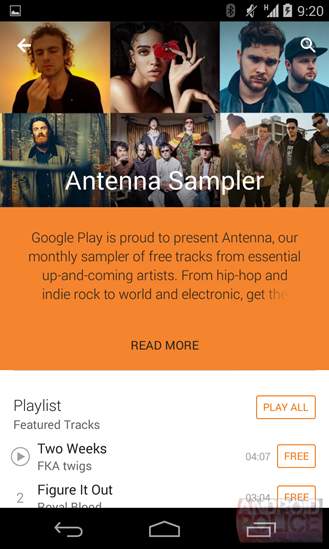 Of course, there are fun visual treats tossed in here and there. The build is obviously still a work in progress, but one obvious treat is the new hamburger icon which - as shown in Google's design spec - animates from a three-line icon to a "back arrow" and back again on interaction.

Unlike our previous Play Store preview, this time we are able to dig a little deeper into the app itself. Under the hood (at least from what was provided to us), there aren't many thrilling developments, but there are a couple of interesting items to take a look at.

First, some drawables. Inside the Play Store APK there are five ic_launcher files besides the revised Play Store icon (which is the thumbnail for this post). They correspond to all of the Play apps plus an extra icon simply for "Play Apps."

We aren't exactly sure why these are here. The launcher icons for Google's Play apps are commonly found inside the Play Store app, but I personally have never seen them appear inside the app. It's unclear whether these represent unreleased launcher icons for the apps themselves or whether these boiled down material-inspired icons will simply act as promotional or placeholder images in the Store app.

At any rate, there's at least one more interesting tidbit - according to what we've seen, there are additional strings for the per-device restoration capabilities we previously covered. For those not aware, information we received back in July pointed toward a more powerful device restoration process when setting up a new device. Basically, the process would allow users to restore sets of apps on a per-device basis, so if a user were setting up a new tablet, they could choose to restore apps and data from a specific tablet, ignoring apps they've previously downloaded on phones or other devices. Information on this is still sparse, and we haven't seen the process in action yet, but we can share some new strings describing the functionality.

From these new strings, it would appear users can choose a device profile from which to restore, and then individually select more apps to install in addition to the predefined set. The process may also indicate to users when the device they've chosen was last used, much like the web Play Store does for new app installs.

That's all we've got for now. With the launch of Android's L release no doubt looming, we shouldn't have long to wait before we see this update officially released.