The Oppo N1 was a bit hit and miss: its gigantic frame and unconventional swiveling camera were interesting, but it turned more heads thanks to a special edition that came with the CyanogenMod ROM pre-installed. In David Ruddock's review, he praised the screen and build quality, but had to take away points for the gimmicky rear touchpad, latency, and lack of LTE. We've been interested to see what Oppo would show off next, and GSM Arena seems to think they have a sneak peek at exactly that. 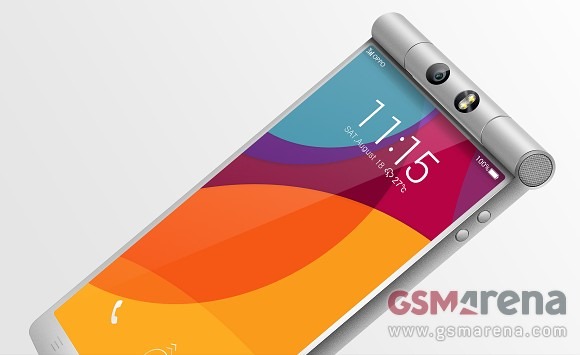 Behold, the Oppo N3. Or at least a render that one anonymous tipster claims is the Oppo N3. This shows a phone that's impressively thin, save for a bulbous circular section above the screen that houses the rotating camera and dual flash module along with a speaker on the side, possibly twinned on the opposite side for stereo. Beneath the screen you can just barely see Oppo's usual capacitive navigation buttons. The body looks like aluminum, but that could just be the matte grey coloring.

I'm about half and half on this thing - it looks like it's either an enthusiastic fan render or a legitimate render that's been far overdone. (The lack of any kind of screen bezel between the glass and the edge is a dead giveaway.) Oppo isn't one to shy away from an unconventional design, but that cylindrical top is a bit much even for them; it's like the "bump" camera modules on the old Motorola DROID RAZR models multiplied by three. The source did not provide any specifications or timeframes, but the N1 is due for an upgrade in the next few months.

What say you, readers? Would you be OK with an oddball phone shape like this one if the majority of the body was considerably thinner?

Light In The Dark Is A Clever Color-Based Puzzler