Samsung's Android-based Galaxy Zoom phones haven't exactly been a runaway hit. Maybe it's because no one really wants a massive camera strapped to the back of their phone, or maybe it's because they're lumpy and expensive. Whatever the case might be, Panasonic is throwing its hat into the super powerful phone-camera with the LUMIX Smart Camera DSC-CM1, a gorgeous little point and shoot that hides a full Android phone (including calls and data) on its back end.

The phone portion of the CM1 is relatively high-end, with a 2.3Ghz Snapdragon 800 processor, a 4.7-inch 1080p screen, 2GB of RAM, and a surprisingly unskinned version of KitKat. But the real stunner is the fact that the lens and sensor are probably the best available on any Android device, including Sony's latest Xperia phones. The gigantic 1-inch sensor is a full 20 megapixels, and it's sitting behind a Leica F/2.8 28mm lens with a manual focus ring. Physical controls to engage the camera app and a separate shutter button help make the CM1 look much more like a camera than a phone. The DSLR-style manual controls for exposure, aperture, and ISO compliment 4K video shooting. 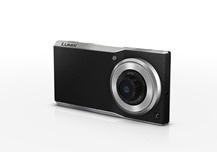 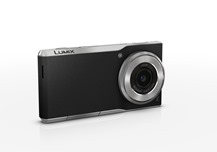 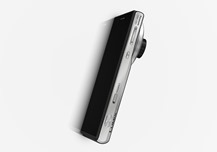 All that said, the CM1 is a little chunky for a phone at 21mm (though it's pretty small for a camera) and its reliance on MicroSD cards and a 2600mAh battery means that you'll have to make a few concessions to the smartphone world. The biggest issue is probably that lens: while it's a fantastic piece of glass compared to just about every other smartphone camera, it's fixed, so you won't be zooming in or out on your subjects. At least that metal and faux leather body looks nice.

The LUMIX DSC-CM1 is scheduled to go on sale in France and Germany in November for an eyebrow-raising 900 euro ($1164). While an expansion into more European countries is likely, we'll probably never see this phone in North America. Check out The Verge's post for a hands-on from the Photokina trade show.