People have been searching for an easy way to download YouTube videos to Android since... well, probably since the original G1. And sometime in the very near future, Google is prepared to give it to them... if they live in India. Tucked into the promotional materials for Android One's launch was this tidbit about letting users download YouTube videos for watching online later. The idea is for users to download the videos on WiFi and save on data charges or access them when outside of mobile coverage. 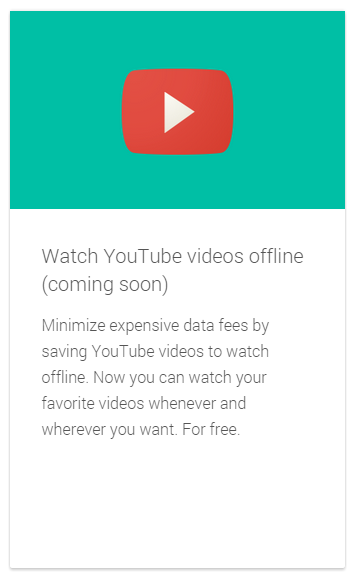 Exactly when YouTube will be available offline hasn't been disclosed. It's possible that the feature will roll out worldwide - Google tends to use the same apps across borders, after all. How this would work with the upcoming YouTube Music Key, if that service ever actually manages to get off the ground, we couldn't say. It's also worth pondering how Google will integrate advertising into offline YouTube videos - perhaps a 15-second clip will be downloaded right along with your Zero Punctuation review.

Aside from a brief mention in the Android One presentation and the small mention on the website above, Google is holding tight on the details. A press release promoting Android One did say that "In the coming weeks, we’re making it so that much of YouTube will be available offline in India." According to that wording, the rest of us might not have immediate access to the feature.

Source: Android One - thanks, Vibhor Mittal!

Light In The Dark Is A Clever Color-Based Puzzler