If you follow developer Jack Underwood (or myself) on Google+, you're probably aware that Today Calendar, a calendar replacement that has traditionally put streamlined, pleasing design at the center of its mission, is undergoing a full redesign in anticipation of Android's L release and inspired by Google's new design guidelines.

Until now, testing has been limited to a small community of intrepid early adopters, but today the app has entered a public beta through the Play Store.

As Underwood explains in a post to Google+, the beta does not contain any Android L APIs since Google currently doesn't allow developers to distribute apps reliant on L code through the Play Store. That said, many design changes are already in place, and the public beta will aid in gathering bug and crash reports to fix up the app in preparation for a full launch. 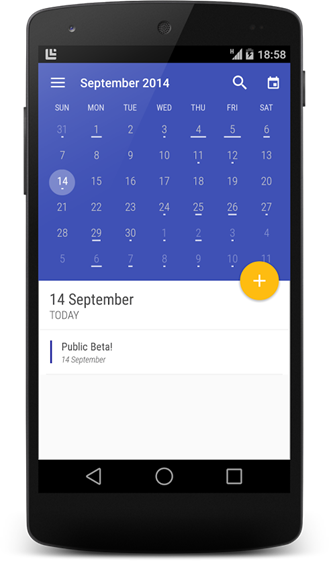 Speaking as an insider (I'm responsible for the new visual design), I can advise readers that Today's redesign is very much a work in progress. The beta release will help immensely in squashing bugs ahead of release, while more and more of the planned design changes and features get implemented.

For now, the primary visual changes include a redesigned primary view, agenda, and event detail views, in addition to new slide-out navigation and a more simplified experience overall. Next on the chopping block are day and week views, along with further refinement and a couple of new treats.

As with any Play Store beta, users need only join the beta community and then opt in to become a tester (relevant links below). From there, just wait for the beta update and begin submitting your bug reports!