Of course the other three players will be doing the same, whether they're controlled by humans or AI. The last player to ricochet a ball gets the point if it manages to slip past someone else's defenses. When a dozen balls are rolling across the field at once, it's possible to play smart and purposefully score... but it's hard enough just playing defense. Modifiers will appear on the field periodically, giving you a wider puck or freezing your enemies, and your own puck can be upgraded with the points you earn. 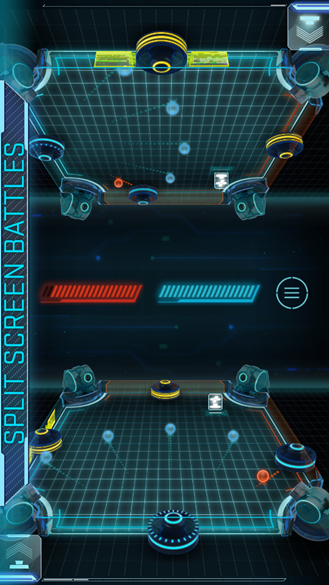 But the best part of Futu Hoki is probably the local two-player mode. You and a human opponent can play on opposite sides of a device, working together in a 2-on-2 match with the computer, going mano-a-mano, or in a 4-player free for all. Single-player modes include both an "Adventure" campaign with upgrades or a simpler Breakout-style minigame. Futu Hoki is free with in-app purchases for currency, but they're not onerous, and a single $1 currency boost will also permanently remove the advertising.