Micromax is a manufacturing company founded in Delhi specializing in low-cost hardware, making it an ideal partner for the Android One program. Google announced Android One back at Google I/O in June. It's a system that's essentially Nexus for emerging markets: cheap Android hardware developed in partnership with multiple manufacturers, all running "clean" AOSP code with updates issued directly from Google. At the time, Google vice president Sundar Pichai showed off a typical Android One device from Micromax with a 4.5-inch screen, dual SIM card support, a MicroSD card slot, and an FM radio, with a non-contract retail price of under $100 (approximately 6000 Indian rupees). 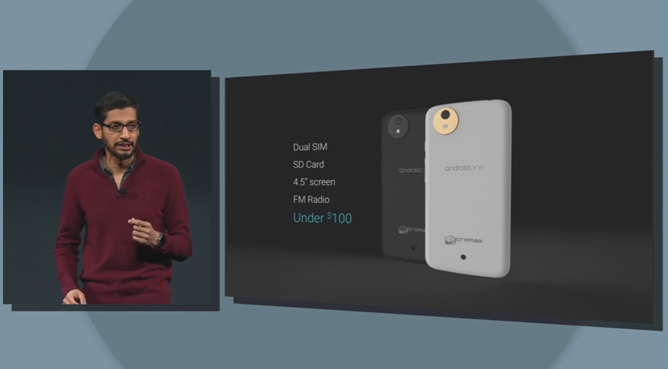 A Micromax model, which appears to be the one hinted at in Amazon's tweet, was shown in the presentation slide. There aren't any details on price or specs for this particular design, but the Spice model leaked yesterday by India's home-grown retailer Flipkart used a 4.5" 854x480 screen, 1GB of RAM, 4GB of storage, a 5MP rear camera, and a 1700mAh battery for Rs. 6999 ($115). Micromax's model will probably be similar in most respects, although we can hope for a lower price. But with profit margins that are probably already razor thin, that might not be possible. So far India is the only market confirmed for the Android One Program.

Google's event will be held at noon IST (2:30 AM Eastern US time). If Amazon's tweet is to be believed, handsets will go on sale later in the day.