Android is showing up on a lot of different devices these days - some of which make more sense than others. While I don't necessarily want my favorite mobile OS running on my fridge or oven, I'm willing to give it a shot on something that makes at least a little more sense, like HP's Slatebook 14, for example. The idea is simple: it's a 14-inch Tegra 4-powered laptop running Android. Initially I thought this would be pretty cumbersome and annoying, but it's actually surprisingly useful. I wouldn't necessarily recommend it as a "laptop replacement," but it may be a good, usable solution for users who only want to do one or two things at a time, or for other lightweight tasks like web browsing or social networks.

I've actually spent the last couple of weeks using the Slatebook, and while some minor tweaks are needed to make it a bit more functional, it actually isn't a terrible solution for a cheap, well-built laptop. 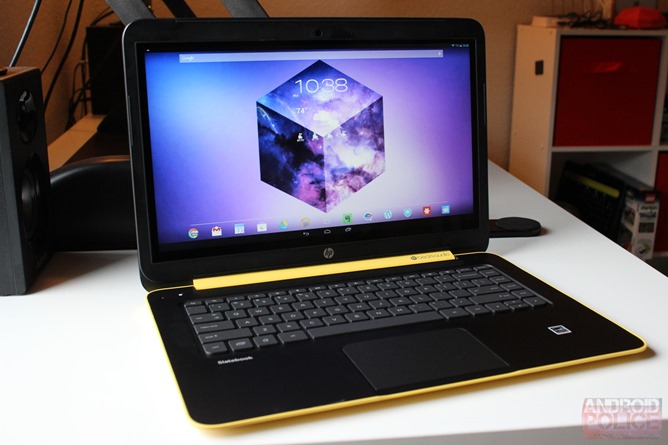 The first things I noticed about the Slatebook 14 when it came out of the box is that it's really thin and feels super solid. Once I cracked it open, I knew that was an accurate assessment - this is probably the nicest laptop I've ever felt at this price point. I originally thought the color scheme would be pretty horrid, too, but it actually looks great in person (and I'm generally not a huge fan of gray or yellow). Overall, I'd say it's a winning design. 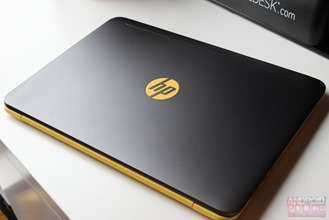 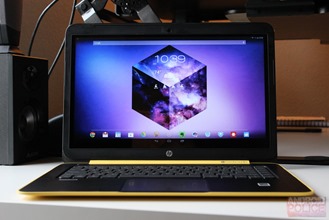 When closed, The SB14 is nice and compact, with absolutely no movement in the frame. That doesn't change once it's opened, either - everything just feels great. It's very, very well made, and I absolutely love the build. The keyboard is also great; the keys have a good amount of travel, and are extremely quiet and comfortable. Typing on the SB14 is an absolute joy (I actually wrote the majority of this review on it), though I'm bummed that it doesn't have a backlit keyboard. I'm at a point in my life where I'm not sure I can survive without a backlit keyboard. 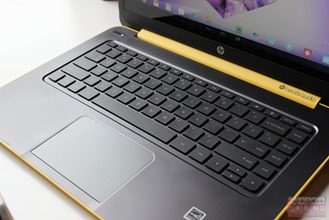 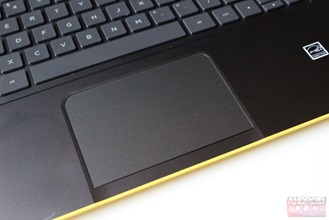 The touchpad also feels really nice, though it's a little too sensitive for my taste. There is a palm rejection setting, thought turning it too high renders the pad nigh useless. This makes it hard to find a happy medium where it's useful but still blocks out most accidental touches. The cursor jumped on me too many times while working on this review, which is insanely frustrating. What's worse is that there's no way to completely disable the pad and simply rely on the touchscreen. I feel the rage in my heart.

The SB14 features a pretty decent 14-inch 1080p display, which is a great size for a device like this. The display itself isn't the best I've ever seen, but it's surprisingly not bad for a laptop of this price point. Colors are slightly washed out and/or dingy - whites are more gray tinted, and most bright colors just look sort of meh, but it's still pretty dang usable. Viewing angles are surprisingly good for a lower-end display, too. 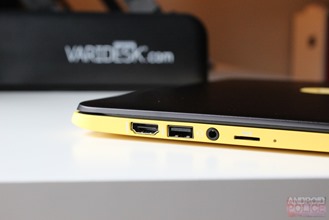 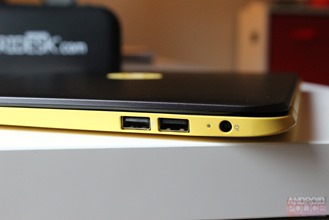 Overall, I'm super impressed with the SB14's hardware on basically every level. The build quality is fantastic, and the keyboard is probably my favorite hardware feature of the device. The touchpad and screen are a little iffy, but for a $430 laptop they're both pretty solid.

But let's be honest here: you really want to know how Android handles the laptop form factor, right?

What I found the most interesting about using Android on the Slatebook 14 is that it doesn't feel anything like using Android on the HP Slatebook x2 or ASUS Transformer. Maybe it's because the screen is larger, or perhaps it's just knowing that the display can't be removed and used as a tablet. Or maybe it's because it feels like a laptop, whereas "hybrid" devices feel like something else entirely. Either way, I found myself using the SB14 like a laptop, because, well, that's what it is. 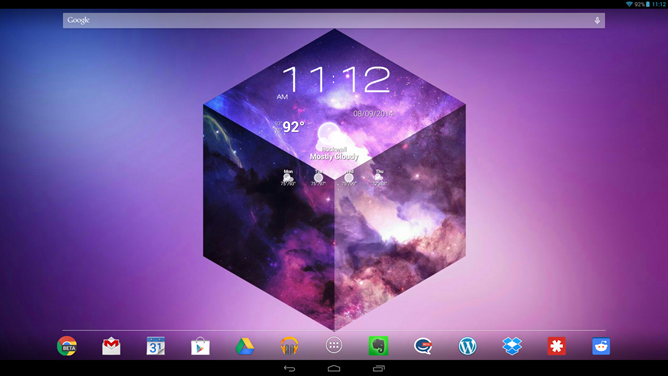 Here's another shocker: the experience wasn't nearly as bad as I expected it to be. Sure, Android is still pretty limited on a device like this (mostly due to the lack of multiple on-screen apps at one time), but HP actually made some good choices to ease the pain and make Android a bit more useful on this form factor. For example, the keyboard has all the keys you would need to quickly navigate the OS: recent apps, home, search, back, settings, volume and media controls, a screenshot button, voice actions, and a few others. Once these are incorporated into your workflow, it makes Android much more useful. The touchscreen helps, too, because sometimes it's just easier to reach up and tap something than anything else. The one thing I'd like to see on the keyboard is a quick way to access Google Now, perhaps by long-pressing the home button. I'd also like to see a button to show the notification panel, but that may be me just being picky. More than anything, I'd like a way to run multiple apps (at least two) on the screen at once time – with a little time and effort, HP could make this happen (though I know that won't happen). 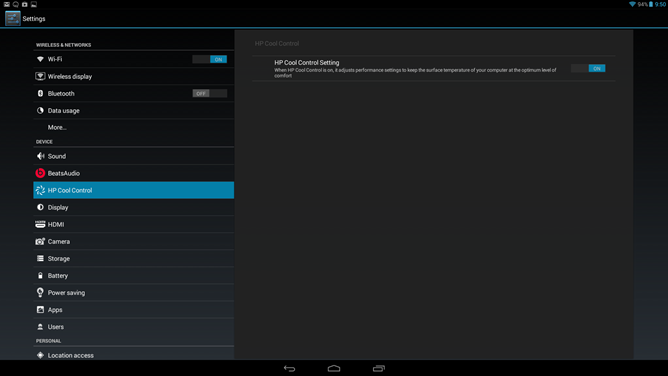 That said, once I installed a few key apps - mostly Swipe Pad - that improved my workflow even more. I'm able to switch between Evernote (where I wrote this review), Chrome Beta (for research and whatnot), and the AP team chat almost instantly. Would it have been nice to have at least two of those things on the display at once? Sure. Was the experience awful without that option? Not really. In fact, I may argue that I'm more productive this way, as having what I'm currently working on full screen and in my face has kept me more focused. Plus, switching between all of my active apps is a breeze - ALT+TAB works on Android the same way it does in Windows. Between this and having my most needed apps accessible from anywhere with Swipe Pad, the SB14 is pretty close to being a legitimate laptop.

Where software modifications are concerned, HP pretty much left the SB14 stock. There are a few enhancements - like Tegra 4 processor management and Beats Audio, as well as something called "HP Cool Control," which aims to "adjust performance to keep the surface temperature of your computer at the optimum level of comfort." My guess is that the processor is actually tucked away under one of the palm rests and it gets throttled back once it hits a certain level. I disabled this feature and didn't really notice any additional heat. It did seem to give a nice little performance bump, but that could've just been placebo. The moral of this story is: if you can't take the heat, find the kitchen's Cool Control switch and turn it on...or something like that. 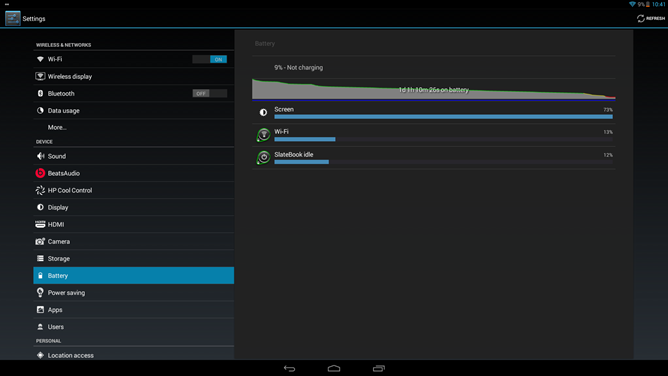 Speaking of performance, let's talk about that for a bit. This is a Tegra 4 device, so you can pretty much expect performance to be solid. It doesn't disappoint...most of the time. On occasion there was a bit of typing lag in Evernote, but it looks like that was caused by some memory-hogging apps (namely Hipchat, which we use for AP team chat) running in the background. To me that really seems more like poor memory management (or perhaps lack of RAM) than anything. Either way, it remained a useable laptop throughout the duration of my time with it, which I was pretty impressed with. I tried to use it as I would use my normal laptop (within its own limitations, of course), and it consistently performed surprisingly well.

HP states that the SB14 should get about nine hours of battery life. I used it (almost) exclusively for a full day of work, and it hit 5% after about seven hours. I realize that HP's claim is a best-case scenario, but I don't feel like it's unrealistic, either. I had several apps running in the background that I was switching between, two Gmail accounts set to sync, and the AP team chat spitting out notifications for every message in the room. That's a pretty heavy load, and I was honestly impressed with how long the SB14 lasted. Even more, it charges crazy-fast, even while being used. 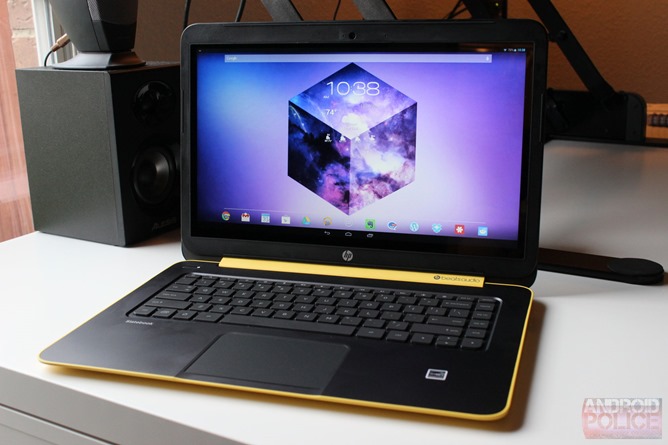 So, do I recommend Android on a laptop? Not really. Is it usable with the right setup? Sure. If you want Android on a laptop (and I'm sure some people do), then the Slatebook 14 is the only way to go. You could opt for one of the tablet/laptop devices out there, like the Transformer Infinity or Slatebook X2, but they don't offer nearly the same experience.

For better or worse, the Slatebook 14 is a full-on, no arguments, unapologetic Android laptop. If you're into that, I recommend it. If you're just looking for a cheap laptop, however, I'd go for a Chromebook.

Bloomberg: HTC Is Developing A GoPro-Style Camera To Be Revealed On October 8th