Back at the Google I/O keynote this summer, we saw a very interesting demonstration - as Sundar Pichai explained, Google wants to make the experience between Android devices and Chromebooks seamless by allowing Android apps to run natively on Chrome (using App Runtime for Chrome, currently in beta). Evernote, Vine, and Flipboard were demonstrated on stage, and today Google has announced the first batch of Android apps that will run on Chrome right now. Among them are Duolingo, Evernote, Sight Words, and Vine. Flipboard is still notably absent. 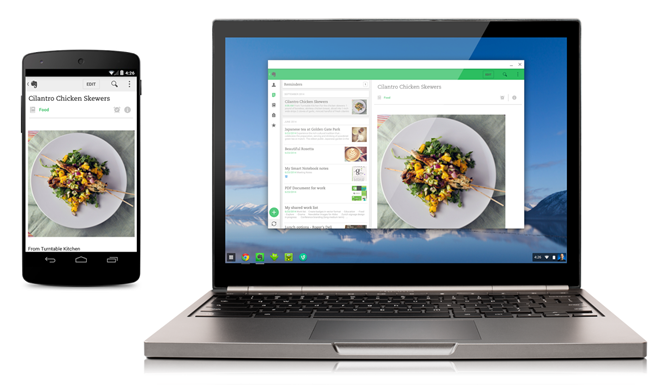 For now, Google is working "with a select group of Android developers to add more of your favorite apps," meaning there won't exactly be a flood of native Android experiences coming to Chrome OS users. Still, the feature is already pretty awesome. Apps are downloaded from the Chrome Web Store (for devices running Chrome 37 or above) and show up in the task bar just like regular Chrome apps. They can run in either their tablet or phone layouts, meaning the full Android experience is faithfully represented on screen.

Google has open-sourced parts of the App Runtime for Chrome (ARC), and encourages users to suggest their favorite apps for inclusion by filling out this form.

CyanogenMod Publishes Unified Nightly ROM For The US GSM, International, Verizon, Sprint, And ...

Full Fat Releases NFL Kicker And NFL Quarterback 2015, Hopes To Drive The Ball Into Your Bank ...