It looks like Samsung is sending the latest public version of Android 'round the houses. Yesterday the Galaxy Note 3 on Sprint got upgraded to Android 4.4.4, and according to a few end users, Verizon's flavor of the Galaxy S5 is getting it today. A long thread on the popular XDA Developers forum began a few hours ago, with multiple Galaxy S5 owners reporting the download coming in. One user posted the download link, a hefty 346MB file. 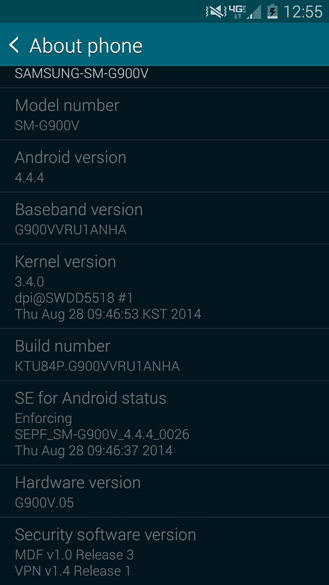 Neither Verizon nor Samsung have documented the 4.4.4 update on their support sites, which is pretty unusual - it's faintly possible that this is a test build that was accidentally sent out early. Some users report a changelog that mentions a "Bluetooth media failure" bugfix. No major cosmetic changes are included, but that's not surprising - Android 4.4.3 is primarily bug fixes, and Android 4.4.4 is a security patch.

If you're getting the update on your Verizon Galaxy S5, drop us a line with a screenshot of the changelog. And if you're not, then you can manually flash via the link above or wait patiently for the batched rollout to reach you. As always, root users should be wary of the update if they want to keep those permissions, though XDA user "open1your1eyes0" has a method that he claims will let you update and keep root.

We'll update this post when an official changelog becomes available.

Update: Well, here's the update text from Verizon and Samsung... and it doesn't say anything except that it fixes a Bluetooth bug. Thanks to reader Manjeet for the screenshot. 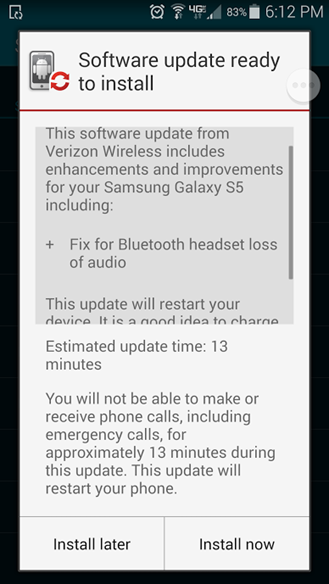