Update: Aaaaaaand it's live. You can download the latest version of Netflix here. It looks like it's on a slow rollout, so don't be surprised if you can't get it right it away.

Enhanced integration with Chromecast, including a new "Post-play" experience to easily continue watching at the end of TV episodes.

Confession: I watched four 90-minute episodes of Sherlock in a single sitting, thanks in no small part to Netflix's auto-advancing "Post-Play" feature on the web. It's that little pop-up interface that automatically goes to the next episode in a TV series if you don't press anything. Netflix added it to the Android app back in June, but if you want to watch the next episode via your Chromecast, you have to grab your super-powerful space age phone and tap it with your meaty fingers. It's like being thrust into the Dark Ages in between episodes of House of Cards. 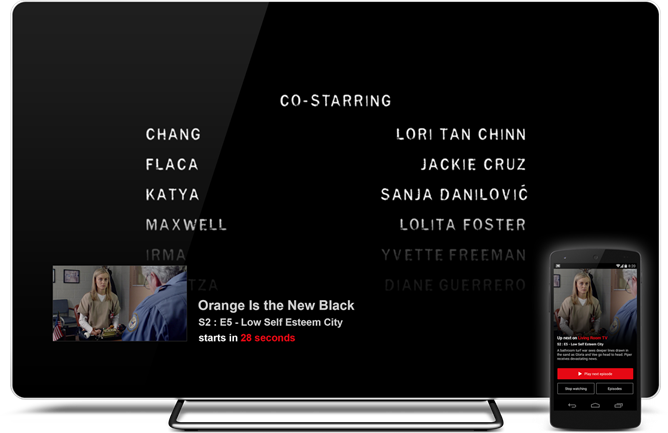 Well no more, intrepid couch potatoes. According to the latest blog post from Netflix, the interface for the Chromecast will be upgraded to include auto-advancing episodes in "the next few days." Just like the web interface, doing nothing will let the next episode play (unless you've reached the end of the series). It looks like it will take 30 seconds to advance instead of 15, to give you more time to grab your phone or tablet and select something else.

Netflix says that the Chromecast interface will be updated for streaming from your PC (and presumably a ChromeOS device) soon. Let the bingeing begin.

SNK Makes The Rhythm Of Fighters Free To Play, But Those Who Bought The Game Get A Bonus

Google Voice Integration Is Currently Rolling Out In Hangouts