It's been over two months since Google gave Nexus 5 and Nexus 7 owners a chance to tinker with the upcoming L release of Android, in what has been the biggest beta test in Android's short history. With all of us waiting on a release sometime in the fourth quarter of 2014, it's gratifying to know that the powers that be are hard at work getting Android L ready for primetime. If the latest updates to the public issue tracker are accurate, some of the biggest and most critical bugs in Android L have been patched.

The most dramatic of these is the Nexus devices' inability to send or receive MMS messages through the default Hangouts app. This only seems to happen on the American carriers AT&T and T-Mobile. Apparently the issue has been resolved: the final message from yesterday reads "The development team has fixed the issue you have reported. This change will be available as part of the next public release," and the status of the bug has been changed to "fixed." According to the letter of the message, you shouldn't expect to see the fix for this problem until Android L is published in its final form. 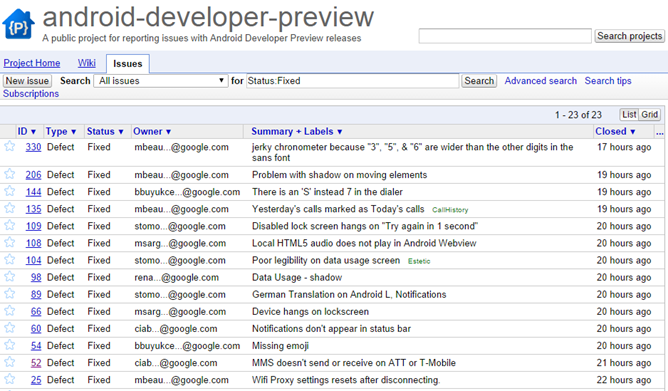 Thirteen other bugs have been marked as "fixed" in the last 24 hours, with the same indication that they'll be changed in the release build. They range from the annoying (missing emoji, the dialpad's 7 replaced with an "S") to the crippling (lockscreen hangs, absent notifications). You can see all of them, as well as nine more bugs marked "fixed" back in July, by using a filter on the developer preview hub of Code.Google.com. There are still hundreds of bugs that need fixing between now and release time.

We still don't know exactly when a public release of Android L will be available, or indeed, what new hardware or capabilities Google will show off when it comes. (Or what they'll call it.) But given the company's propensity for showing new developer phones in October or November of the last three years, we can reasonably expect something in the next couple of months.