Releasing the L preview was an important leap forward for Android as an ecosystem, but, outside of a single almost meaningless update, we're probably not going to see any new builds up until the final L release. I can sort of see why the Android team doesn't want to put out builds with incremental fixes, saving all the improvements for a grand finale unveiling, so in the meantime, any glimpse at their progress is very interesting to us as well as developers working on porting their apps to adhere to the new Material Design guidelines.

Today, we have a photo showing a Nexus 5 running build LRW66E, posted to the Chrome bug tracker a few days ago and subsequently set to private. LRW66E points to an approximate September 4th build date, so the build is fairly fresh. (Now would be a good time to plug our Android Build Number Calculator, which is probably the easiest and fastest way to calculate build dates from Android releases.)

Thankfully, we have both the attached image and the bug report saved and ready to be examined below. I've also pulled up a similar screen on my Nexus 5 running L preview for a detailed comparison. Let's squeeze out every bit of juice out of it, since we're given the opportunity, shall we? 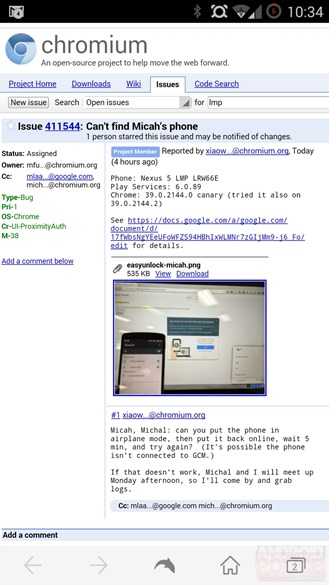 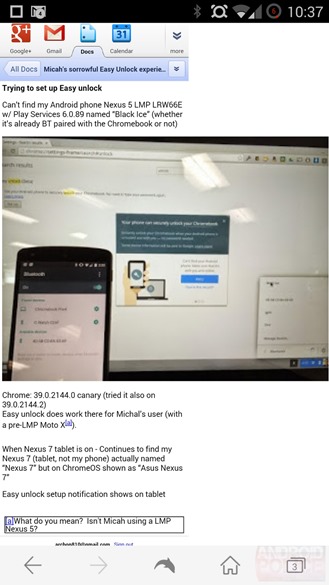 Yes, I know, I should charge my battery 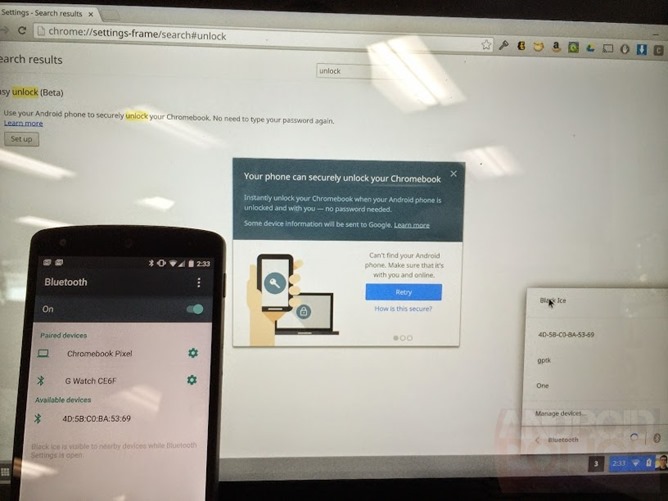 Disclaimer: Before jumping into the comparison, I should preface it with a disclaimer that anything and everything you are seeing here could change by release time. It's not official until it's announced.

Let's break the differences down, shall we? On the left is the new build, and on the right is L preview: 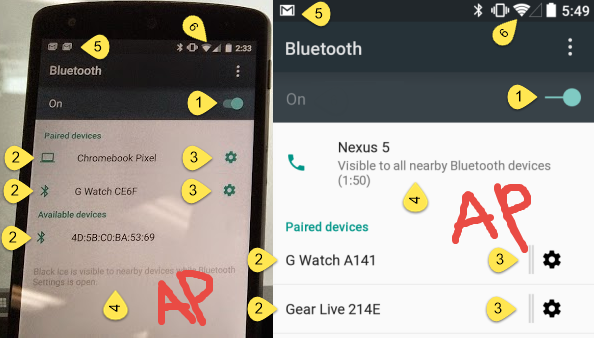 One of the most drastic changes seems to be the updated, shorter and fatter toggle (also called a Switch in the Material Design guidelines). Considering that it doesn't match the guidelines, pictured below, anymore, we are pretty confused.

Either the guidelines are going to be updated or they decided to mess with the switch UI here for some reason, but the differences are right there in front of our eyes.

My colleague Liam Spradlin is pretty ticked off about it, and considering he's actually a talented designer currently working on the Today Calendar redesign, I can understand where he's coming from. At the same time, Google should be able to tweak things until the last moment while in this preview stage, so my reaction here is neutral. Other than the preview toggle looking a lot more elegant.

As you can see, each Bluetooth device is now identified with an icon, making it easier to tell them apart. I'd like to see a watch, speaker, and headphone icons here eventually, in addition to the laptop one that is pictured above.

3. Gear icon color and nearby divider.

The Gear icon is now teal and matches the rest of the UI, while the double-line separator next to it is gone altogether. I like this change - it makes the UI look cleaner.

If I'm not mistaken, the horizontal separators are still there, though they're very fine and almost invisible in the photo.

The Bluetooth visibility seems to have received a makeover, both in logic and location, although it's possible that the logic change will be only limited to developer devices. Rather than manually making the phone visible to nearby Bluetooth devices for 2 minutes, it seems the new L build does so automatically, while you're in Bluetooth settings. I'm not sure that it's the most secure technique, so I doubt that we'll see it in the public release, though I may end up being wrong.

Of course, as you can see, the location of the notice has jumped from the very top to the very bottom, moving it out of the way of the paired and available device lists. Considering that it's not longer a toggle but rather just a bunch of warning text, this change makes sense.

The stacked Gmail icons finally seem to indicate that more than one unread message awaits, whereas the current build only shows a single Gmail icon no matter how many unread messages you have. It's still not nearly as useful as the actual number you can see in the CyanogenMod screenshots above, but at least it's a step in the right direction.

It's unclear if the stacked notification icon is a result of updates to the OS, the Gmail app, or the icon design itself.

It looks like the Wi-Fi and signal strength icons were updated to be solid rather than contain breaks for every level. It's now in line with the images in the Material Design docs, though the Wi-Fi icon looks a little fatter in the photo compared to the below.

Icons in the Material Design docs

LMP made another appearance, along with an updated version of Google Play Services that jumped a whole major version from 5 to 6. Oh how much I'd like to know what it contains within, but alas, all we have are numbers. LMP, "Lemon (or Lime) Meringue Pie," could still change at any moment, but that's what it's been called internally for months now.

Update: As pointed out in the comments, the Play Services version is likely a typo, since the current one is 5.0.89. It'd be too big of a coincidence if the new one jumped to exactly the same minor and patch versions.

As you can imagine, a single image can only give us so much to work with, and there are still some questions we have that won't be answered until the L release is final. But we'll take all the improvements we can lay our eyes on in the meantime, be it updated designs, reshuffling of elements on the page, or new logic. As always, our tip line is open right here, so if you spot similar reports in the future, be sure to send them right in.

Android 4.4.4 Update Should Be Rolling Out For Sprint's Samsung Galaxy Note 3 Now