This article is part of our Android Police Files series.

Greetings, loyal readers. Several months have passed since our last installment of the Android Police Files, and a few gems have piled up in that time. People have come to us with vague messages about Minecraft, stalkers, in-app purchases, and really weird dreams. Seriously, we're not sure what to make of that last one. Give it a read and let us know what you make of it.

Subject: I want to have an email

I want to apply an email & one account, one Google

One Google... Google One? Oh no, not another One!

I am new at this game.

Just keep punching trees and digging. Eventually you will end up with a Star Wars film or the entire country of Denmark.

Subject: I am being stalked over the internet for about 3 months i know who he is in Australia i am un portland Oregon. His ip XXXXXXXXXX  his phone is a Verizon dynamic iptimus his name is XXXX XXXXXXXXX my name is XXXXXX XXXX from portland oregon my phone is lg android thank you

Then, a day later.

I am still being stalked by XXXX XXXXXXXXX from mandurah Australia. Please help me i turn on my phone and there he is what am i going rto have to do to get some help'

I am still. being stalked and my account has been hacked please help me get rid of tgis.person before i do something drastic to myself !!!  I know who he is i have his ip pleaze help i am on the brink of a nervous breakdown. Thank you

So when you turn on the phone, he's literally right there? We're going to need some screenshots.

I WANT MY SWYPE BACK!!! THAT WAS ONE OF THE MAIN THINGS THAT SEPERATED DROIDS FROM IPHONES!!! I HATE THIS!!! GIVE MOTOROLA DROID USERS OUR SWYPE BACK!!!!!

The bigger issue is that Motorola Droid you're still lugging around. Please tell me there's a "4" at the end of the name that you forgot to mention, because at least then your phone would only be two and a half years old. Or better yet, one of those Droids released last summer. The original Droid's 256MB of RAM and 512MB of internal storage really aren't going to get you very far these days, even if the Swype developers came over and hand-delivered you the APK.

Iam moved all device file system to an sdcard and now my device not work what should I do.

Take the microSD card out and blow on it. If the phone doesn't work right away when you plug the card back in, hit it a few times.

I've spent about £1500 on diamonds and cash playing this game! However a lot of the time it doesn't work properly! The tanks keep jumping around, keep ending up in the wall, point blank shots don't register no matter how much you fire! You then get destroyed by a tank 3-4 ranks below you while with it's back to you! And no matter how much diamonds and cash you spend for upgrade and improving your tank! Doesn't make much difference as you still get destroyed by one shot while your behind a wall!!!!! Either fix it or give me my bloody money back! Or I'll take further legal action!
Sent from my iPhone

I'm hope you meant to say that you spent £1500 on diamonds in cash while playing this game at the real-life store that sells physical, real-life diamonds.

Otherwise, well, I can't even say you got ripped off. You screwed up, and you can't come after us for your Iron Force problems just because we wrote a post about it.

Membership cancelled. We don't know why you started sending us $10 a month via PayPal, but we appreciated the ride while it lasted. 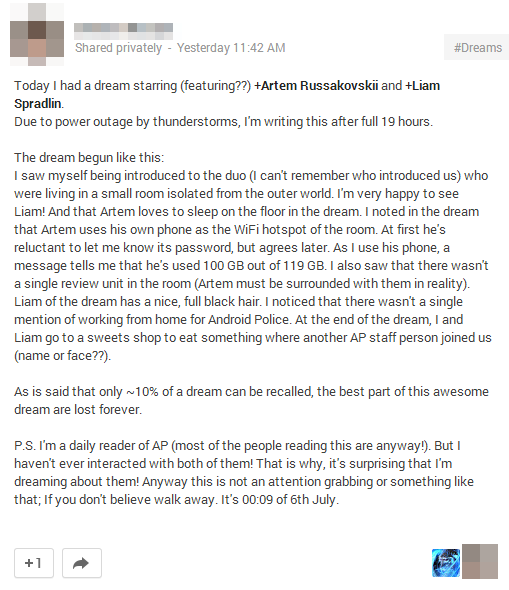 It wasn't a dream. Please forward us your address so Artem can send you his pretty substantial bill.

If you've also dreamed of Artem or Liam, feel free to reach out to us on Google+ or hit up our contact page. We don't bite, though we do sometimes share particularly hilarious messages via the Android Police Files. But hey, we keep things anonymous. Our team has standards, you know.

We hope you've found this to be an amusing diversion from from the onslaught that was IFA 2014. Until next time, check out our previous installments, and keep it tuned right here for all things Android.