Almost a year ago, I reviewed the Soundfreaq Sound Spot, a speaker that's mid-century modern design is eye-catching to some (like myself) and not so appealing to others. As polarizing as the design may be, though, there's no denying that it's a killer little speaker for the money. For this year, Soundfreaq doubled up on the speakers, added a couple of new tricks, kept the same sexy design, and called it the Double Spot. I've been playing with the Double Spot for a couple of weeks now, and have to say I'm impressed. Soundfreaq typically delivers solid sound quality for the price, and the DS is no different. Let's dig in.

When it comes to "best speaker for the dollar," there are two brands that come to mind: G Project and Soundfreaq. The former offers the best large speaker for the money with the G-BOOM, and the latter has some of the best around-the-house speakers on the market. While I wouldn't say either excels at having the most portable design, they still balance each other quite well. In fact, the Soundfreaq Sound Rise is my go-to alarm clock/bedroom speaker. I love it.

But I digress – we're supposed to be talking about the Double Spot. 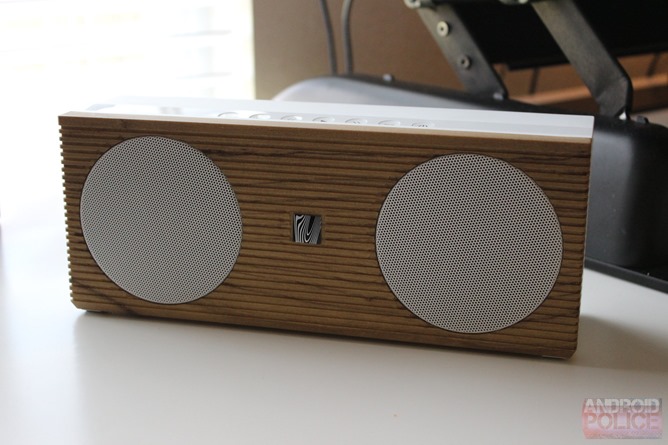 When Soundfreaq first told me about the Double Spot, I thought "hmm, so they're just going to stick two Sound Spots together in one enclosure. Cool." Wrong. I immediately noticed that the DS is more than that. For starters, it has a new feature called UQ3 that I haven't seen on any other Soundferaq speaker. (Update: As pointed out in the comments, this isn't actually a new feature. It just hasn't been present on any other Soundfreaq speaker I've reviewed.) Basically, it's an audio enhancement that brings new life to the music, giving it a sort of virtual surround feel (to my ear, anyway). It's like a slight reverb or echo combined with a subtle change in dynamics. It's not an in your face kind of change when it's switched on, but it's immediately noticeable. And most of the time it makes everything sound better – I've only turned it off a couple of times since I started using the Double Spot. 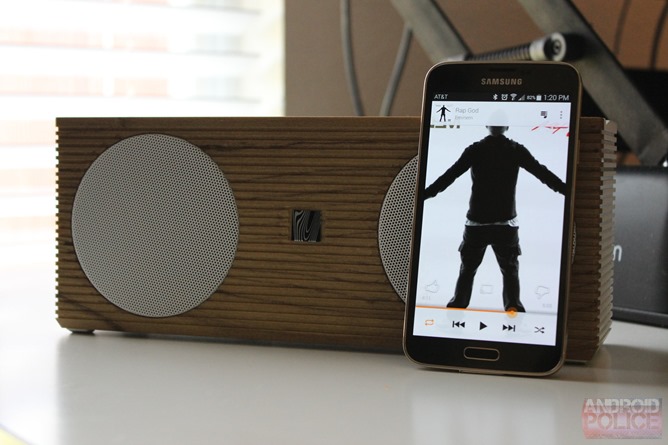 The UQ3 setting works in conjunction with the onboard EQ, which essentially consists of three pre-configured settings: warm, flat, and bright. While testing I tried all three settings with UQ3 on, as well as off. While none of the combinations sound "bad," I found that the flat setting worked best with UQ3 on and warm with UQ3 off. This is of course completely subjective, but I figured I'd share my preferences nonetheless.

Now on to a bit of a broader picture: what the DS sounds like in general. Like other Soundfreaq speakers, the Double Spot is really well balanced. I don't know what these guys do to their speakers, but they know what's up – I haven't heard a bad Soundfreaq speaker yet. The Double Spot also gets plenty loud – easy enough to fill a large room full of people. It does, however, start to distort at high volumes, so be aware of that.

Soundfreaq claims that the Double Spot's battery pack should provide about six hours of playback, which is on par with my experience. I was able to use it for almost a full workday – I actually got about six and a half hours of use at fairly low volume – but naturally there's a lot that can affect the outcome, like environment, volume, and so on.

As I've already stated, the Double Spot is pretty polarizing in appearance (judging by the comments on the Sound Spot review, anyway). I love the mid-century modern aesthetic, but I also love basically all mid-century modern things. The black model isn't as modern looking as the white/wood variant in my opinion, so if you're not a huge fan of the style opt for that one. 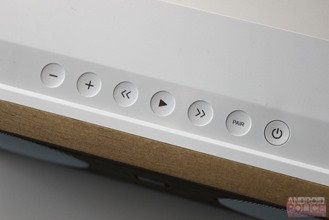 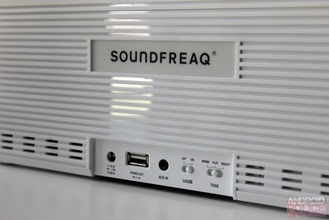 Otherwise, it's pretty much identical to the Sound Spot, just with two speakers. All the controls are found on top: volume and track controls, a pairing button, and the power button. All simple stuff. Around back is where you'll find basically everything else: the AC in, USB out (for charging devices), AUX in, and UQ3/Tone switches. 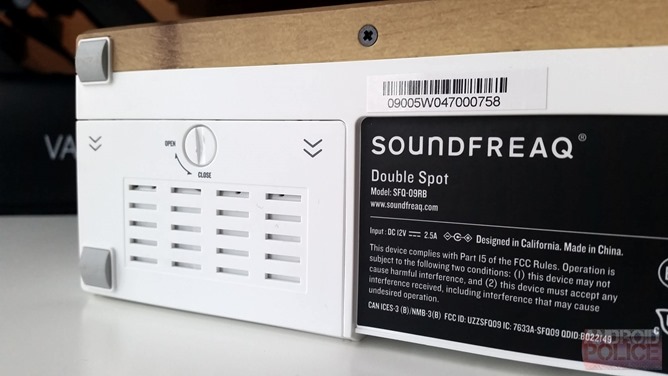 One interesting thing about the DS is that it has a user-removable battery, and the base model even ships without one (for those who never plan on taking the Double Spot anywhere). The battery is pretty affordable at only $20, so if you opt to get the battery-less model and then change your mind, it's an easy fix. I dig that a lot. 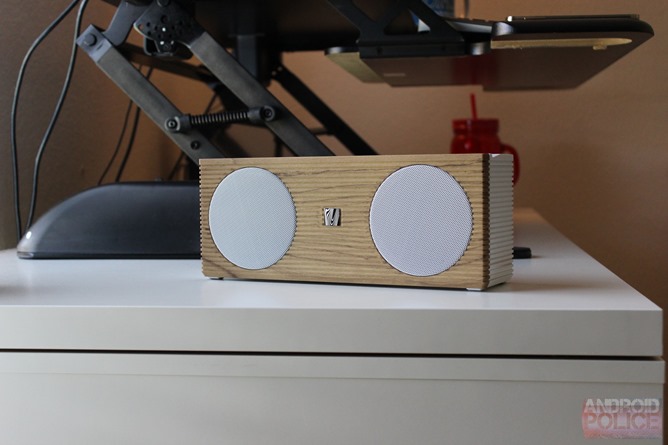 At $130 for the base model and $150 for an included battery, the Double Spot is a good deal. It's attractive and sounds good, which makes for an excellent around-the-house speaker. As I've stated a few times already, I trust Soundfreaq as a brand, as it consistently releases quality products for not a lot of money. The Double Spot is no different, so if you're the market for a good little unit to keep around the house, this is an excellent choice.

While the battery-powered model can be used on-the-go, I don't think I could see myself tossing it in my backpack – it's really just too bulky for that. If you're in the market for something more portable around the $150 price range, my vote goes to the UE BOOM. It's actually $180, but the extra $30 is easily justifiable in my opinion.

If you don't see yourself using it outside of the house, however, don't be afraid to grab the Double Spot. You won't be disappointed.