The new Moto X is official, and now, so are a few of its carrier arrangements. This list is bound to grow over time, but as of now AT&T, Verizon, and US Cellular have all confirmed that they will carry the phone this fall. Motorola says the handset will launch later this month, but time may vary between when each of the carrier begins to offer it online and in stores. 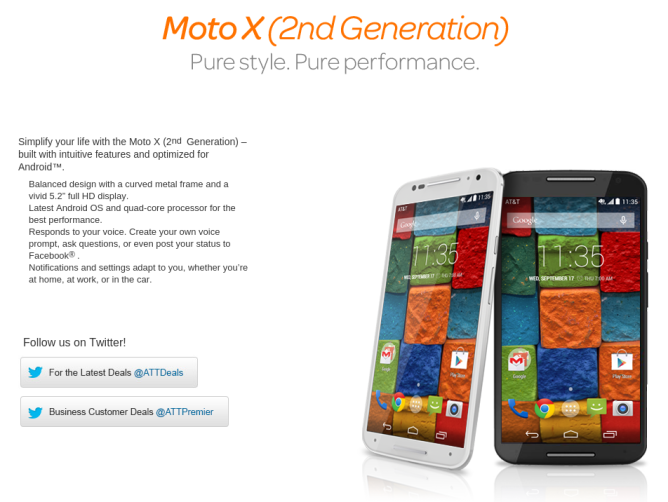 We don't have dates just yet, but Verizon has this sign-up page for people who don't want to stay tuned to blogs to know when it arrives. US Cellular says it will carry the phone starting this month, but it hasn't offered specifics beyond that. The original Moto X was available on all five of the largest carriers in the US (though T-Mobile didn't sell it directly), so we'll wait to see how things work out this time around.

As for the Moto Hint Bluetooth headset, AT&T is the only carrier thus far to give it a mention. Look for it to debut around the same time.

DALLAS, Sept. 5, 2014 /PRNewswire/ -- AT&T1 today confirmed that it will add the second generation Moto X with Moto Maker as well as Moto Hint to its industry-leading portfolio of devices and accessories. AT&T was the first to offer the customized Moto X, the first smartphone designed by you. Further details on pricing and availability will be announced at a later date.

Make the most of your Motorola device and accessories, while on-the-move with the nation's most reliable 4G LTE network.2 Additional details about the new Moto X and Moto Hint include: