Since we haven't heard anything substantial from Motorola in a while – unless you count the Moto 360, new Moto X, new Moto G, and Moto Hint – let's talk about a charger! Moto's new Turbo Charger is all about powering up devices on the quick...as long as they have Qualcomm's Quick Charge 2.0 functionality, anyway. 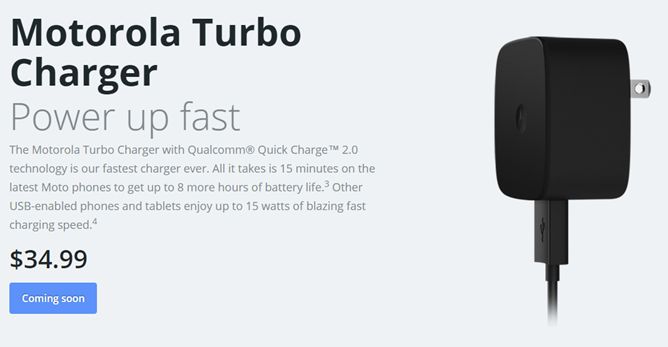 So here's what Moto is offering with the Turbo Charger: eight hours of battery life from a 15 minute charge. Sounds good, right? Yes, but there's some fine print (literally – there's a little bitty blurb at the bottom of the page) that provides a few stipulations. For one, the device must be "substantially depleted," because the charging rate slows as charging progresses. Oh, and the eight hour claim only applies to Moto devices that support Qualcomm's Quick Charge 2.0. It looks like most new 400, 600, and 800 series Snagdragons should support the feature, so the new X and G should be covered.

So yeah. If you often find yourself with like three percent battery remaining and need to juice up fast, this may be the way to go, assuming it's worth a thirty-five dollar bill to you.

[Update: Working Again] You Can Buy A Moto 360 From Motorola Right Now Using These Links