If you've been watching the tablet space lately, you've probably noticed Qualcomm isn't exactly winning the processor wars: Intel, Samsung, and NVIDIA have been slowly clawing back market share in a segment where cellular radios just aren't as important. The biggest gains have undoubtedly come for Intel, who have been extremely aggressive in pricing their mobile chipsets low and, allegedly, providing superior sell-through and promotional services for retailers and OEMs, something Qualcomm and NVIDIA simply don't have much experience with, and budget chipmakers like MediaTek and RockChip can't afford.

Case in point, the upcoming ASUS MeMo Pad 7 LTE. It has the same 64-bit Bay Trail-T quad-core processor as the upcoming Lenovo Tab S8. The MeMo Pad 7 has a 1920x1080 display, 2GB of RAM, 16/32GB storage options, 5MP rear and 2MP front camera, and LTE support. It'll cost 199 Euros in the EU, but don't expect the LTE version to make it to the US, if we're even lucky enough to see a Wi-Fi only variant. 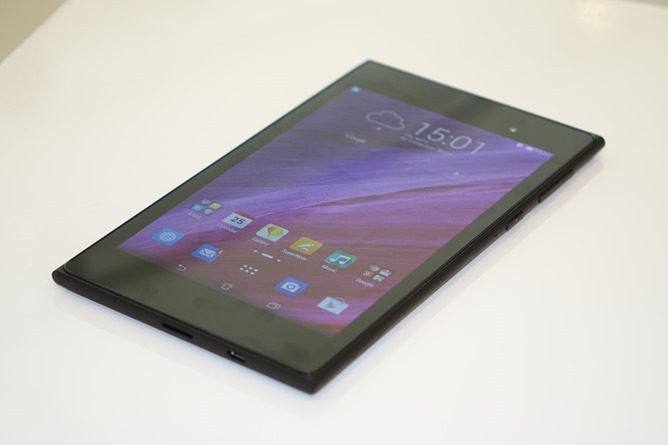 The MeMo Pad 7, to be honest, feels pretty cheap, like most ASUS budget tablets in the MeMo range. Its powerful processor and PowerVR GPU, though, make it pretty respectable from a performance standpoint, and an LTE modem will surely make it a pretty competitive device in the EU market. The display on this MeMo Pad actually seems pretty great - viewing angles are good and brightness appears strong.

I don't exactly love the look of the MeMo Pad 7, especially the shiny black plastic version, which is an absolute fingerprint magnet. A matte black would be a welcome option, as I don't find the champagne finish super attractive, either (ASUS is marketing this color toward women, because it makes the MeMo Pad look like a clutch or wallet sort of, which it does).

Still, it's a pretty quick tablet with a pretty good screen at a pretty great price point - ASUS is probably going to sell a lot of these things.

Hands-On With The Huawei Ascend Mate 7: The Most Exciting Phone At IFA, Hands Down

Hands-On With The Lenovo Tab S8 And Vibe Z2 Pro