The hits just keep on coming. A video for Motorola's second-generation Moto G has been posted before the expected reveal later this evening/morning. According to the video, the phone will use a larger, 5-inch HD (read: 1280x720) screen, and the unidentified processor is a quad-core model. Motorola also highlighted the fact that the Moto G will get "pure Android with [a] guaranteed upgrade."

The Motorola homepage was also briefly updated with a few hints of the Moto G, among other devices. It's easy to see the new dual speakers borrowed from the budget Moto E, and the promotional text says that the new model will be under $200 even without a contract. Whether that includes an LTE radio (which was added into the original Moto G with a more expensive upgrade) isn't clear. The G doesn't have access to the stylish back panels from the Moto X, but various "shells" will be available. 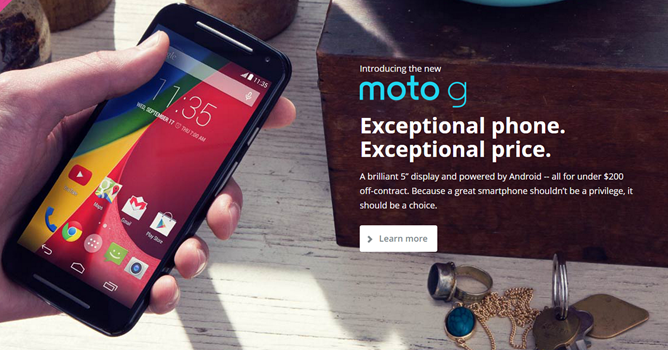 The specs are still towards the mid-range: the new Moto G has a 5-inch, 720p HD screen, probably using a Super AMOLED like the same 720p screen in the DROID Ultra. The battery is 2070mAh, a little on the small side for a phone that big. Storage is 8GB on the $179.99 model, though a 16GB version will also be available. The new Moto G does have a MicroSD card slot.

Cameras are 8MP in the back and 2MP in the front, a small upgrade. The processor is a 1.2Ghz quad-core, probably a Snapdragon 400 or a variant. RAM is still just 1GB, which will be a deal-breaker for some. There is no mention of an LTE radio on the page, though some markets will get a DTV option. Perhaps Motorola has another LTE upgrade model waiting in the wings, like the original Moto G. Also note that the unlocked phone is almost certainly for GSM networks only - Verizon and Sprint customers will have to wait for a CDMA model, if it ever comes.

Colorful shells and flip cases will be available, and the new Moto G will run Android 4.4.4 right out of the gate. Anybody up for a purchase at lunchtime?

Motorola's Tiny Hint Bluetooth Headset Commander Works With The 2014 Moto X And Comes With Its ...

The Moto 360 Is Official With A TI OMAP 3 Processor, 6 Custom Watch Faces, And Included ...