Many moons ago, a plucky little game company named Rovio decided that a hungry wolf wasn't the only thing that could blow down the homes of snarky pigs — airborne fowl would also join in the on destruction. In subsequent lunar cycles, those homicidal kamikaze birds would continue to bring their particular breed of catastrophe down upon on the poor, defenseless porkbellies; and in turn, generate many money-dollars for the twisted jerks that inspired them. The loathsome avians are back to carry out more dastardly plots in Angry Birds Stella.

Angry Birds Stella takes us on a journey through Golden Island as we strive to rid it of the green pig-folk. We're lead by Stella, the pink bird that hasn't done much since standing in for Princess Leia in the Star Wars versions. While a basic premise for a story exists, you're not going to see much more than you've had in the past. This is a fairly traditional addition to the franchise: fling birds, kill pigs, earn stars. If you're feeling jaunty, you'll also unlock some additional costumes for each character as your star total increases.

As always, the birds have some new abilities and there are a couple of new game mechanics to learn. The focus of this game seems to be on powers that are activated by a tap-and-hold, which puts the flight into slow motion and allows you to aim or precisely time your attacks. This mechanic feels a bit more strategic than previous editions. 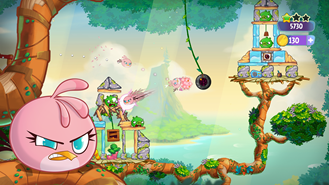 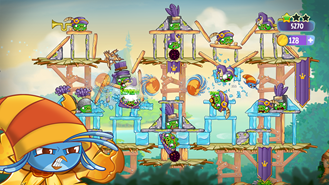 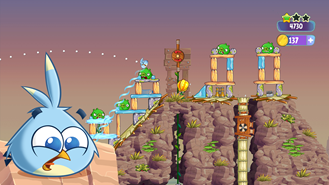 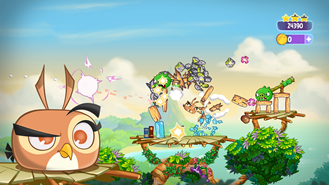 The latest Angry Birds chapter includes support for Google Play Games in the form of achievements and a single leaderboard, which is currently dominated by Rovio's tester accounts. Update: It seems you have to sign in to a Facebook account for cloud save, even though there are no external messages to indicate that. Thanks, David.

The first few levels are ad-free, but you'll quickly run into both banner ads and actual videos that can't be skipped until they're mostly finished playing. Sadly, I couldn't find an option to pay for an ad-free experience. There are IAPs that allow you to purchase in-game coins, should you decide you need to. Prices start at $1.99 for 150 and go up to $54.99 for 7500. You'll earn coins through regular play, but it's pretty slow going. The coins appear to be useful for some quick power-ups if you need help with a level, but that's about it. Rounding out Rovio's revenue stream is support for Telepods, the power-ups and characters you can acquire by purchasing real-life toys and scanning them with the camera.

If you're in the mood to get in on the action of Angry Birds Stella, it's free from the Play Store. Just hit the widget below!