LG says it has been working on the G Watch R for two years. Whether this is true or not, the manufacturer now positions the original G Watch as a "reference device," which makes sense given their partnership with Google on the product and its speedy release after Google I/O. At any rate, the G Watch R is positioned as a product more in keeping with LG's design philosophy and the key elements the company (and more specifically its designers) believe make a good, compelling smart watch.

Unfortunately for our hands-on, we are not able to publish photos of the watch outside of demo mode, but what we can discuss is the hardware.

There haven't been many clear looks at the hardware of the G Watch R yet, but from what I had seen in photos, I didn't feel compelled by its design. The bezel, which by LG's own admission is bigger to house display connections and waterproofing mechanisms, is not as imposing at it seems, and the watch overall is considerably lighter than it looks. Its 46mm overall diameter is not too huge, even on a thin wrist like my own, and the screen seems sufficiently big and bright, though its 320x320 resolution does betray itself with some tapering rows of pixels near the sides. 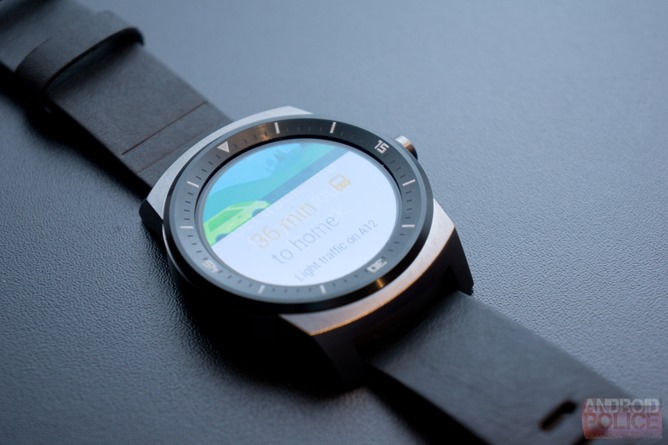 The metal used in the device's chassis seems solid and premium, and the leather strap the watch comes with needs some breaking in, but does feel fairly decent on first blush. LG says other straps are under consideration but the watch is compatible with all 22mm watch bands, giving users plenty of options.

At the bottom edge of the watch is a microphone for accepting voice commands, and on the side is a dial (like a real watch) which acts as a power button. If you turn the dial nothing happens, but a long press will conveniently send you to the watch's settings menu.

Around back there's a heart rate sensor and pogo pins for charging. The G Watch R will have a charging cradle much like the original G Watch.

As for specs, the G Watch R will have a 1.3" display at 320x320, 512MB RAM and 4GB storage, a 9-axis sensor along with PPG and barometer, a mic, IP67 certification for water and dust resistance, and an expected release timeframe of October 2014.

Update: WSJ says the release date is October 14th, though it doesn't go into specifics regarding exact territories that would get it first.

In the end, the G Watch R is definitely a compelling Android Wear device. It looks nice, it isn't too heavy, and it has the specs you'd expect from the current generation, but what would make it a great device is an update to Android Wear (which is apparently coming soon)- the nascent platform still has a its own issues.