Sony turned heads last year when it introduced the QX family of add-on lenses, which claimed to add DSLR-style high-resolution photography to any Android smartphone. The QX10 and QX100 lenses were met with a bit of skepticism on release thanks to their high price and strange form factor, but the core idea is still intriguing. Intriguing enough for the company to give it another go-round, anyway, and come out swinging with a new mounting system in addition to a new all-in-one lens.

First up is the QX1. In contrast with the other QX series gadgets, this is not an integrated lens-and-sensor combo, it's a lens mount containing only a 20.1-megapixel APS-C image sensor, an E-series mounting bracket, a flash module, and all the various guts needed to take and store photos. Like the other QX devices it relies on a wireless connection to your smartphone and the Sony PlayMemories app for control and shooting. But unlike the previous devices, it's compatible with all of Sony's E-series lenses, and can access A-series lenses with another adapter. That's a huge variety of high-powered (and expensive) glass suddenly available to your smartphone. Or at least, your smartphone with a giant mount and lens attached. 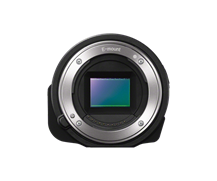 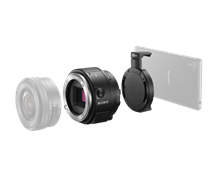 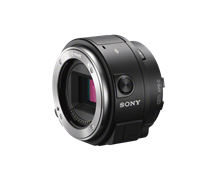 The QX1 system connects to your phone via WiFi Direct, and records images and video either directly to its own MicroSD/Memory Stick Micro media or to the phone's storage. It's self-powered by a rechargeable and removable battery. Photo buffs will be happy to hear that the QX1 uses the same 23.2x15.4mm Exmor sensor as seen on Sony's full-sized Alpha a5000 camera, and features a pop-up flash module.

Whether or not the QX1 can live up to its promising hardware will probably depend on its connection to your phone - the previous generation was plagued with speed and storage issues, so let's hope Sony has improved things. The QX1 mount is up for pre-order now for $399.99 on Sony's store, and is estimated to ship on October 9th. The mount does not include a lens at the $400 price. 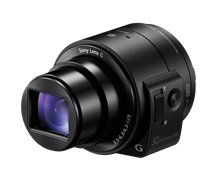 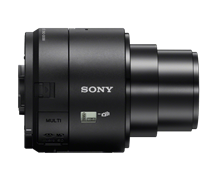 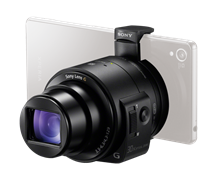 Sony also announced the QX30, which is another combined lens-sensor gadget in the same vein as the QX10 and QX100. The new model uses a 21MP sensor paired with a 30x optical zoom lens (4.3mm-129mm). That makes it much more versatile than the previous QX models, but with F-stop values between 3.5 and 6.3, it's not anything to write home about in terms of photo quality or low-light performance. The QX30 will retail for $349.99 when it launches on October 8th, right in between the two previous models.

Both gadgets are already listed on Amazon.