There's only so much you can say about portable batteries. Power goes in, power goes out, phone charges up. Here at Android Police, we generally just recommend that people buy the biggest battery with the smallest price tag, which usually ends up being one of the various Anker models sold on Amazon. But manufacturer UNU is trying to shake things up with the new Ultrapak Tour series, which they claim charge in a fraction of the time of standard external lithium-polymer battery packs. As in, fast enough that you can get a "full phone charge" worth of power in 15 minutes. 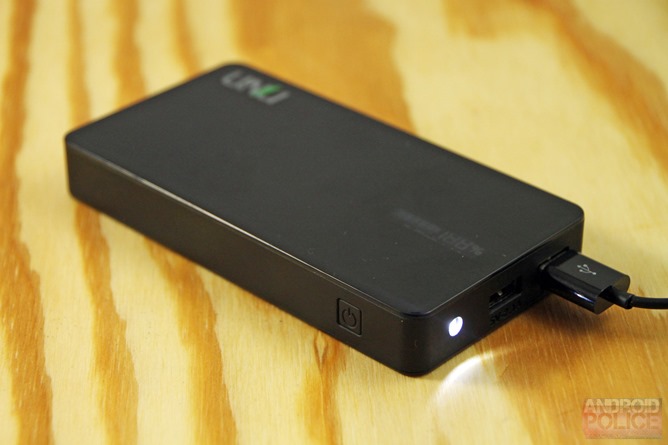 And it's true. After testing, I've found that the Ultrapak does indeed charge at a dramatically faster rate than standard battery packs. But as you might imagine, there are some drawbacks to that capability, namely price, size, and efficiency. The UNU Ultrapak Tour is an easy recommendation for constant travellers who often find themselves with only a few minutes of time at any particular AC wall outlet. But those who only need external power on occasion, or who can rely on hours of charging at home or at a hotel, can probably find better uses for their money.

The Ultrapak Tour is a brick of polished black plastic. It's not especially complex, but then, it doesn't need to be. At 131x78x18 millimeters, the 10,000mAh model is considerably larger than a phone - it's about the same size as the AC power adaptor for my ThinkPad laptop. (The smaller 3,000mAh version is 100x52x17mm.) It's considerably longer and wider than my 9,000mAh Anker battery despite only an 11% bump in capacity, but at 9.9 ounces it's not noticeably heavier. 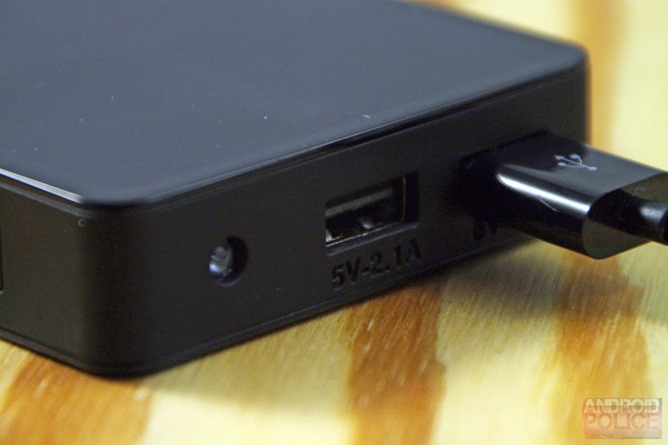 The top side of the battery has a small LCD for showing the estimated charge and the time remaining on the charger until it's full. Other than the UNU logo in the corner, that's it. The square, recessed power button is on one edge, and the input for the AC adapter is on the other, with a handy orange LED to let you know it's delivering power. On the "top" edge you'll find two five-volt USB ports: one that delivers just one amp, and one that gives 2.1 amps for more hungry devices like tablets. There's also a single LED that can function as a flashlight with a double-tap of the power button. The bottom edge is bare, and so is the back, save for the FCC-mandated product information. Only the AC adapter is included in the packaging. 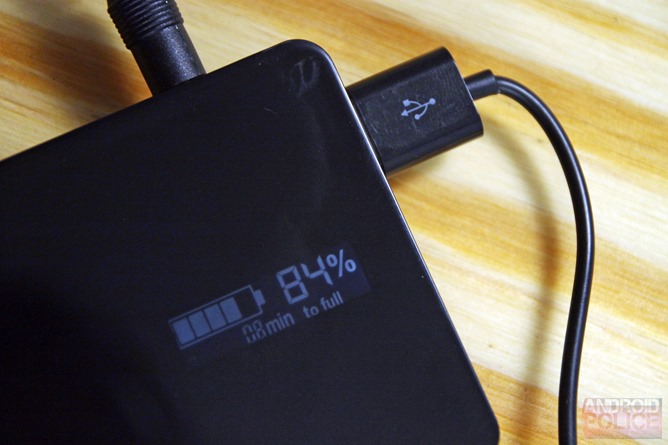 I tested the UNU Ultrapak informally on my recent two-week vacation to Ireland. Aside from the somewhat bulky shape, I found it to be a very admirable traveling companion. It's not as if an external battery pack needs a massive amount of ergonomic design, but USB cables stayed plugged in and I appreciated the numerical charge readout. I used it to top off my traveling gadgets: a Motorola DROID MAXX, ThinkPad 8 Windows tablet, an LG G Pad 8.3 Google Play Edition, and my G Watch. The Ultrapak's fast charging came in handy on more than one occasion as I slipped back to the hotel room between the day's tourist activities and the pub crawls at night.

There was one major drawback while traveling: the AC adaptor. UNU chose to go with a "wall wart" design that's fallen out of favor in the last decade or so, and for good reason. This plus-sized plug blocks normal-sized outlets on top, below, and to either side, so when using my Belkin travel charger it inevitably blocked at least one plug. There's also the fact that the Ultrapak has to be charged with the adaptor - there's no way to top it off via a convenient USB power source, which is often the only one available on airlines. Granted, it would be impossible to charge this battery at its trademark speed with a normal USB plug, but I would have appreciated the option for a slower but more convenient refill.

The Ultrapak does what it says on the box. Here's a breakdown of the charge times I recorded, almost identical across three separate full charges:

As you can see, there's a bit of a "hump" around the 65% charge mark, but the Ultrapak charges faster than any standard portable battery by an order of magnitude. UNU claims that the battery charges eight times faster than competitors thanks to an "ULTRA-X" 31.25 watt input.

My comparisons bear that claim out. After the hundred minutes that it takes the 10,000mAh Ultrapak to fully recharge, my 9,000mAh Anker (using a high-power USB-AC adaptor designed for a tablet) had less than a 10% charge, according to its 10-stop LED indicator. Based on these observations, the UNU Ultrapak is indeed the fastest-charging portable battery I've come across. 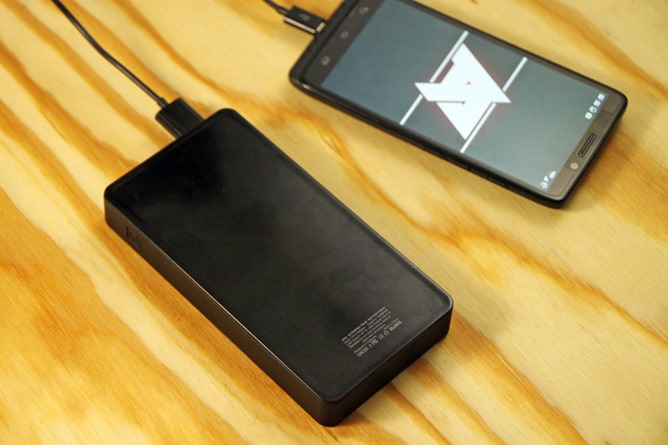 Note: the speed of the charge only refers to how fast the external battery charges its own cell via its charger, not how fast it can charge your gadgets, which is still limited by the USB port and varies by device.

But wait, as the TV infomercial says. There's more.

While I was traveling in Ireland, it seemed that the Ultrapak battery power was putting out less power than I was used to getting. I was charging multiple gadgets on planes, trains, and buses, so I decided to try some more controlled experiments when I returned home. There's a dirty little secret in the world of batteries: efficiency. Currently a typical external lithium-polymer battery pack will have an efficiency of about 70-80%, which means that from a 10,000mAh battery pack, you should be able to reliably get about 7,000-8,000mAh of power through the charge port, across the USB cable, and into your gadget.

UNU provided me with the 10,000mAh Ultrapak Tour battery for this review. With a 10,000mAh battery, the Ultrapak should be able to fully charge smaller Android phones five or more times, flagship phones like the Galaxy S5 three times, and tablets one to two times, at least on paper. For the more technical aspects of this review, I tested with an LG G Pad 8.3 Google Play Edition, which has a 4,600mAh battery. 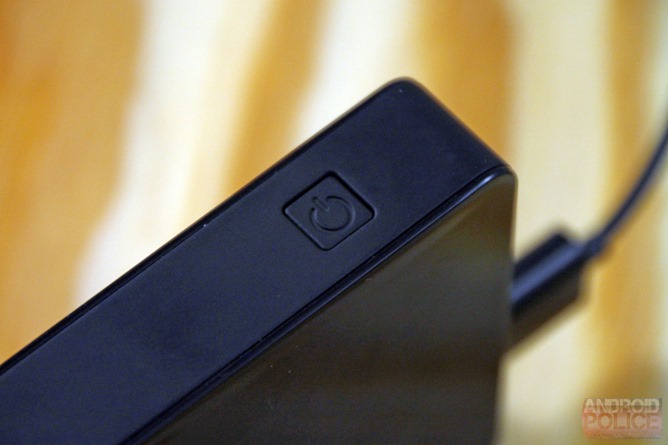 To test the efficiency of the Ultrapak I fully drained the battery on my G Pad, then plugged it into the 2.1-amp port on the Ultrapak while it was "off," and waited until the tablet was fully charged. The LED indicator said that fully charging the tablet had left it with 40% of its battery, which is a bit less than it should have. I drained the tablet again with a looping video, then connected it to the Ultrapak again while it was off, which completely emptied the external battery pack.

When I turned on the LG tablet again, it reported that it had 25% battery power. With one and a quarter full charges, a little arithmetic will tell us that the Ultrapak output a total of 5750mAh of energy. Considering its capacity, that gives it a rather poor efficiency of 57.5%. 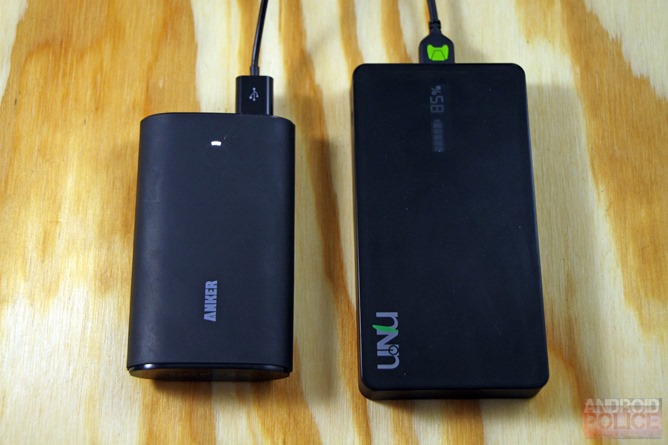 Just for the sake of comparison, I repeated this process with my 9,000mAh Anker battery. I've had this battery for about six months and only used it for two trips, so it shouldn't be suffering from any noticeable drop in charging power just yet. After a full recharge of the tablet, a full drain, and topping off with what was left in the battery, the G Pad had 45% battery remaining. Repeating our math for the smaller Anker, the 9,000mAh battery output a total of 6,670mAh of power to the tablet... beating the larger battery in both output and efficiency with a rating of 74.1%. Not a good showing for UNU.

The UNU Ultrapak Tour is undeniably fast. If you often find yourself bored to death at the one accessible airport power outlet waiting for your battery to charge, its 2,500mAh jump in just 15 minutes is surely a tempting feature. For those people, and those people only, the Ultrapak will be a hot ticket. That's probably why this thing is out of stock until September. 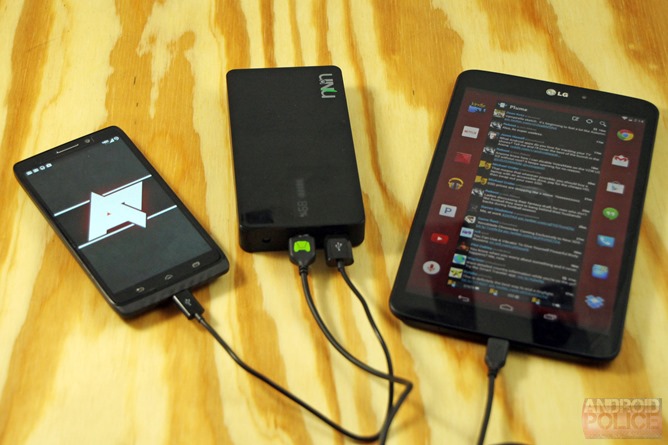 For everyone else, I'd recommend a more typical battery pack. A bulkier package, an unwieldy AC-only wall charger, and a low overall efficiency don't overcome those quick-charging capabilities. It doesn't hurt that the price-per-mAh on the Ultrapak batteries is easily two to three times that of the competition, if you do a little shopping around. The 10,000mAh Ultrapak Tour is currently being sold for $99.99 both on the company's website and Amazon, and the smaller 3000mAh version is a hefty $59.99.