I used the Motorola DROID RAZR M as my primary phone for over six months. I was in between jobs, my not-so-trusty Galaxy Nexus had been smashed, and I knew from previous experience that Motorola's resurrected RAZR line had tough builds and good radios. While it was ostensibly a "budget phone," that ugly little DROID RAZR M was the most reliable Android device I had ever owned. When I got back on my feet, I skipped flagships from Samsung, LG, and HTC, and went straight for Motorola's next DROID phone. 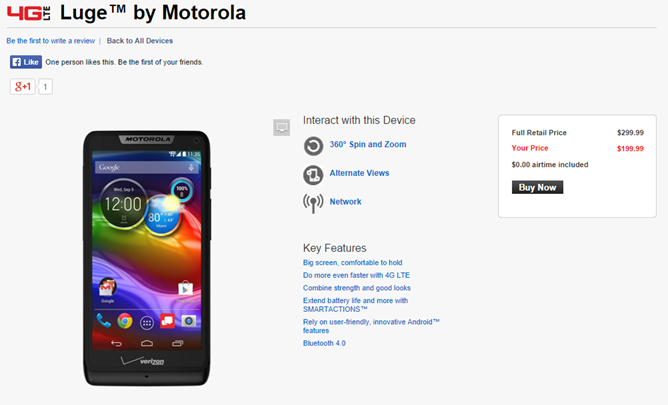 Why am I telling you this? The DROID RAZR M is getting a second life on Verizon's prepaid lineup. Say hello to the "Motorola Luge," a re-branded version of the DROID RAZR M sold to prepaid customers without a contract. As far as I can tell, the hardware is identical - in fact it's entirely possible that these phones are simply unsold DROID RAZR M units in new packaging. If you need a refresher, the Motorola Luge uses a 4.3-inch Super AMOLED screen with a resolution of 960x540, a dual-core Snapdragon S4 Plus clocked at 1.5Ghz, 1GB of RAM, 8GB of storage with a MicroSD card slot, and an 8 megapixel rear camera. Like the upgraded DROID RAZR M, the Luge runs Android 4.4.2 at launch.

Verizon is selling the Motorola Luge for $199.99 with no contract or included airtime. Considering the other options for Verizon's prepaid service, which generally include a lot of underpowered budget devices and pre-owned phones (and, strangely, the original DROID RAZR M for $299), it's a pretty reasonable offer.

LG Slips The European Price Of The G Watch R Into A German Press Release: 299 Euro