Remember when T-Mobile announced plans that included Music Freedom, which let users stream music from certain services without impacting their wireless data limits? Remember when it didn't include [insert your music streaming service of choice here], so you ignored it? Actually that isn't quite fair: Music Freedom support currently includes Pandora, Spotify, and iHeartRadio, which are the heavy hitters in the industry. But it's hard to deny that a lack of support for Google Play Music was kind of disheartening.

Good news, everyone: T-Mobile says that after a user poll indicated that everyone wanted Google Play Music added to the free streaming list, they're going to implement it. Not now. Sometime in the future. Probably before the end of the year, according to this promotional post. Hooray! The free streaming option will hopefully apply both to Google Play Music Unlimited subscribers and free users who have personal music stored on Google Play servers. 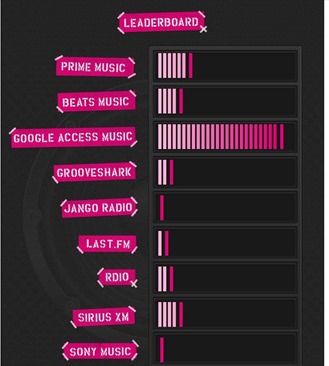 In the meantime, T-Mo is adding six new music services to Music Freedom streaming: Grooveshark, Rdio, Songza, Black Planet, AccuRadio, and Radio Paradise. That brings the list of supported services up to 14, including iTunes and Milk, which are only available on Apple and Samsung devices, respectively. That could be a serious draw for users who want to stream a ton of music without spending the extra money for T-Mobile's unlimited LTE plan.

BELLEVUE, Washington – August 27, 2014 – T-Mobile today announced the first major expansion to its Music Freedom™  program − doubling the number of music streaming services you’ll be able to use with its landmark music streaming offer. Starting today, six new music streaming services – AccuRadio, Black Planet, Grooveshark, Radio Paradise, Rdio and Songza – are all available as part of T-Mobile’s Music Freedom, so Simple Choice customers can stream all the music they want from these services – all on T-Mobile’s Data Strong™  network and all without ever hitting their LTE data bucket.
In addition, T-Mobile announced the winner of its social voting poll, designed in true Un-carrier™  fashion to let customers decide which services they wanted to add next.  After nearly three-quarters of a million people voted, Google Play Music topped the charts as the most requested service.  T-Mobile is on track to add Google Play Music to the Music Freedom program later this year.
“When the big ‘carriers’ look at music, they see an opportunity to use someone’s passion to make a buck.  When the Un-carrier looks at music, we see an opportunity to set customers free from the tolls and limitations those carriers impose,” said John Legere, president and CEO of T-Mobile. “Our goal is nothing less than to set all your music free, and we’re well on our way.”
Just two months ago, in June, T-Mobile shook up both the mobile and music industries with Un-carrier 6.0—a move that took a wrecking ball to the restrictions some traditional carriers place on music streaming with their data limits and overage fees.
And if early results are any indicator, it’s clear T-Mobile customers are embracing their newfound music freedom with gusto. In fact, to date customers have streamed nearly seven thousand terabytes of music since the launch and are streaming 5 million more songs per day than before the launch of Music Freedom.
“T-Mobile’s Music Freedom and services like Grooveshark are about bringing music accessibility to the consumer,” said Sam Tarantino, Co-founder and CEO of Grooveshark, “Together with Music Freedom, Grooveshark is creating a new kind of music discovery on T-Mobile devices. We believe the combined global audiences of millions represents a new and engaged audience for Grooveshark on T-Mobile.”
The new services join iHeartRadio, iTunesRadio, Pandora, Rhapsody, Samsung Milk, Slacker and Spotify already included in Music Freedom. T-Mobile has a vision to add every possible music streaming service to Music Freedom, and any music streaming provider can be part of Music Freedom by applying through T-Mobile’s open submission process. To learn more about Music Freedom, please visit t-mobile.com/musicfreedom.
Qualifying Simple Choice plan and capable device required.  Music streaming does not count towards data allotment on T-Mobile’s network; song downloads, video content, and non-audio content excluded. Data rates apply to Smartphone Mobile HotSpot service and tethered devices.  For included services, see list at http://www.t-mobile.com/offer/free-music-streaming.html.