Update: A Google representative reached out to inform us that the bug report feature only appears if your phone is also in developer mode (tap repeatedly on the Build Number in the "About Phone/Tablet" menu).  You may need to enable developer mode on Android Wear as well, as one commenter points out.

If you've found a problem with your Android Wear watch, you can now submit a bug to wearable app developers. That's definitely a good thing, since certain parts of the platform could use a little spit and polish. But hold your horses: the process for recording and submitting the bug is on the far side of confusing. First update the official Android Wear app to version 1.0.1.1379611, now available on the Play Store.

Then it gets a little tricky:

1. Set the Wear device's screen to the problematic area you want to take a screenshot of to include in the report (if you do want to do that - if not, doesn't matter what screen it's on) 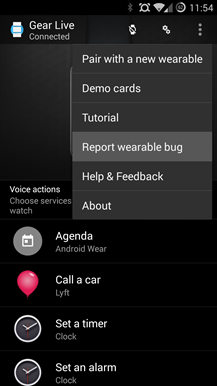 3. Wait, because nothing happens for about 30 seconds. Then you will feel a triple buzz on the watch.

4. At that point, you will see a notification on the watch that says "Touch to share your bug report." Except touching it will do nothing. Confusing! You need to swipe to the right and press Open. 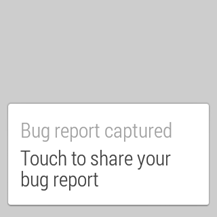 5. This will open a notification on the phone that says "Wearable bug report finished, Click here to send." 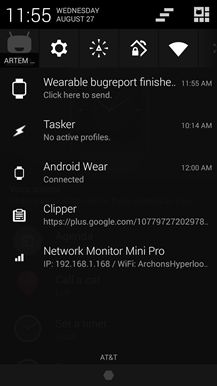 6. A popup on the watch will show up warning you about sending the bug report and how it contains personal info. Except you can't actually scroll it to read the whole message. Seriously, Google? 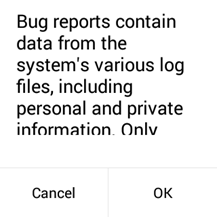 7. Tapping OK will pop up a dialog to select the share method. I selected Gmail. 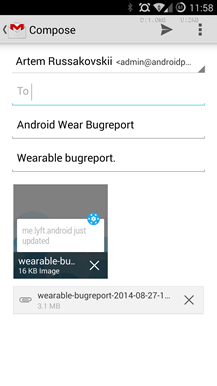 8. In Gmail, the subject, text, attachment, and screenshots will show up, but there's no email address filled in.

Presumably this mechanism is meant to report bugs to Wear app developers, with a handy screenshot attached (which isn't an easy thing to do without an ADB setup). App developers will probably appreciate that, but at present the only way to submit a problem directly to Google is to use the "help & feedback" menu item, which was there before this update. That will include system logs, but not a screenshot.

Inside the app, we also found a few strings referring to an "ambient screen warning," probably adding a few functions for the upcoming launch of the Moto 360, which includes an ambient light sensor in the hardware. There appears to be a toggle setting and a pop-up warning about battery life.

<string name="ambient_screen_warning">Enabling ambient mode will decrease battery life. Are you sure you want to continue?</string>

That's it, nothing else to report.