Update: An update to the News & Weather app posted yesterday, September 8th, seems to have fixed some of the compatibility errors people have been seeing. At least here in the United States, the app is compatible with every Android 4.0+ device for all of our writers. There doesn't appear to be any other significant update just yet.

Google's News & Weather app, AKA the "Genie" widget (after the APK name), has been more or less unchanged for years. The app comes with Nexus devices and some other relatively stock Android hardware, but aside from a few visual touches, the feed-based news and weather widget has been basically unchanged. Google has finally broken the app onto the Play Store for independent updates. The 2.0 release, years in the making, is now available for most 4.0+ devices. We've uploaded the APK as usual, since some users are getting location-based blocks. 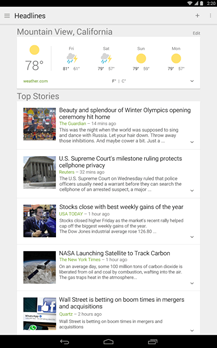 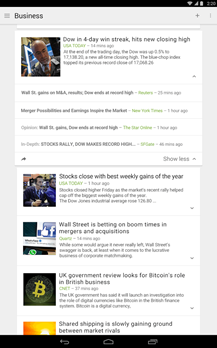 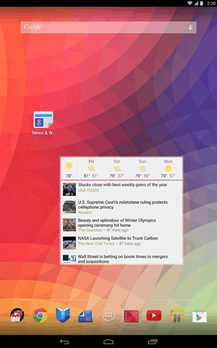 The overall app has been given a visual makeover, including a white Google Now-style theme, a sidebar menu, and more options for nested stories. The widget itself has been updated as well: stories in the 4x1 widget can now be manually scrolled, and the weather-only widget now has a 5-day forecast. There's also a 2x3 widget that can be expanded to fill an entire page, showing content in a scrolling, feed-style list. We'll have more in-depth analysis on the improved News & Weather app and widgets soon.

Update: We wanted to get the downloads out to you as soon as possible, but after using the app for a while, I have to say that Google has improved it in just about every possible way. As a daily user of the "Genie" widget for more than four years, I've come to love its simplicity and flexibility. The same basic layout is included, but the app visuals and design have been brought forward into the KitKat (and in some places, Android L) era. 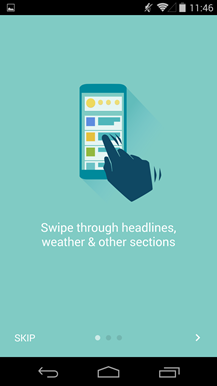 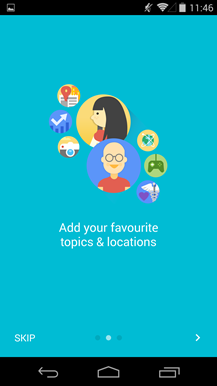 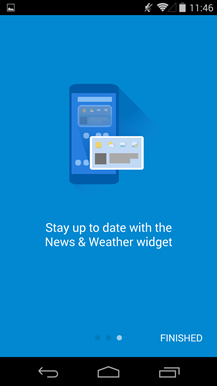 In case it isn't obvious, the darker screenshots are from the old version, pre-installed on the Nexus 5. The lighter ones are for 2.0.

The standard 4x1 widget that's been there forever remains structurally the same, but there are some big changes. When viewing news headlines, you can now tap the down arrow on the right side to manually scroll to the next story. There's no way to see which sub-section of your news you're currently viewing. 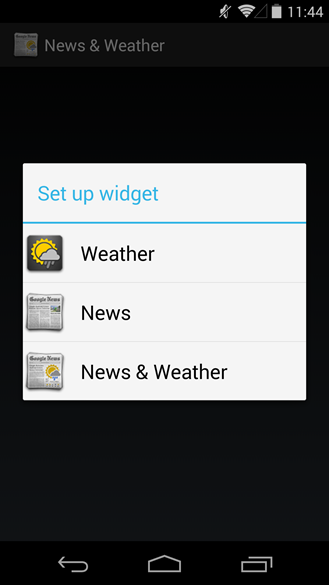 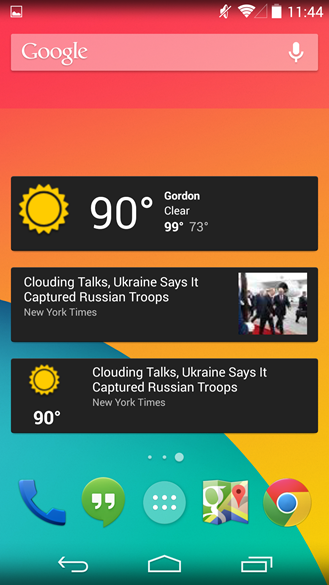 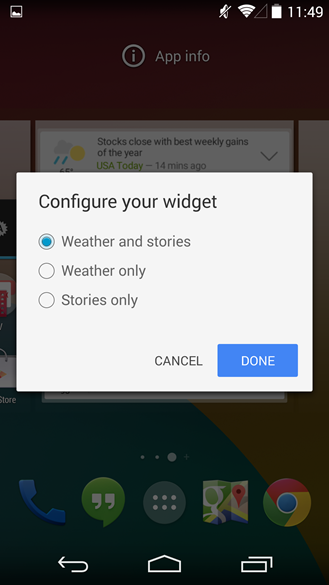 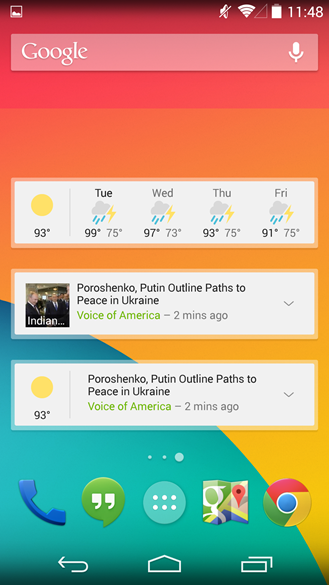 The 4x1 widget with both news and weather has the same simple layout, plus the aforementioned manual advance, but now the 4x1 weather-only widget includes a five-day forecast in addition to the current status and temperature. It's a much more effective use of the space. 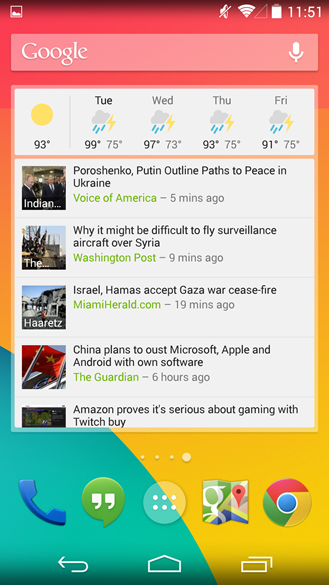 The biggest change on the widget front is the new 2x3 option. Well, technically it's 2x3, but it's flexible enough to work at almost any size, up to and including an entire launcher page. This widget includes the five-day forecast on top and a scrolling list of news stories below, presented in the style of an RSS feed . The stories aren't infinite, and after a few you're given a link to the main app.

Though you're dependent on the filters in the Google News web service for the stories themselves, the widget is a fantastic way to get some topical news. It works well in both its compact and expanded forms.

The app that opens with the widget has been redesigned from the ground up. The main page is "Headlines," which shows you your location-based weather in the main "card." The card expands to show the temperature and precipitation throughout the day, much like the old full-screen weather page. 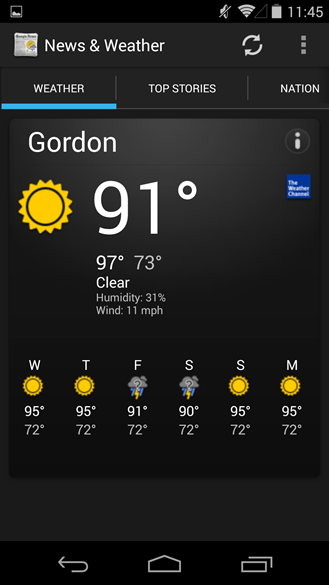 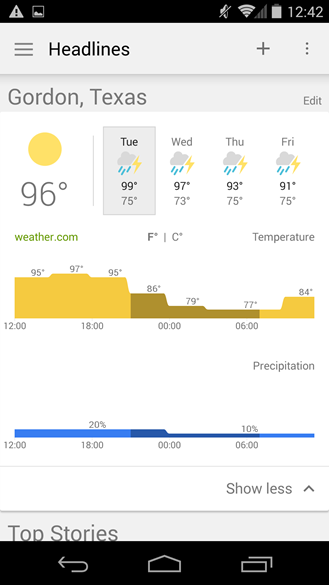 Scroll down the Headlines page and you'll see condensed subsections for all the areas of news you've selected. The defaults to enable or disable are the same as they ever were (National, World, Sports, Business, Tech, et cetera), but there's a new Spotlight section as well. This mirrors the editor-selected Spotlight section on the Google News website. You also get a location-dependent section for local stories. Each sub-section of Headlines contains three stories and a link to the larger topic. 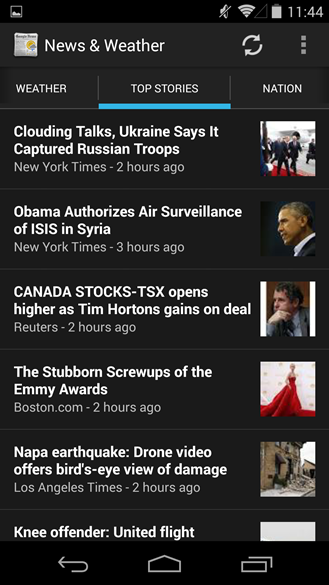 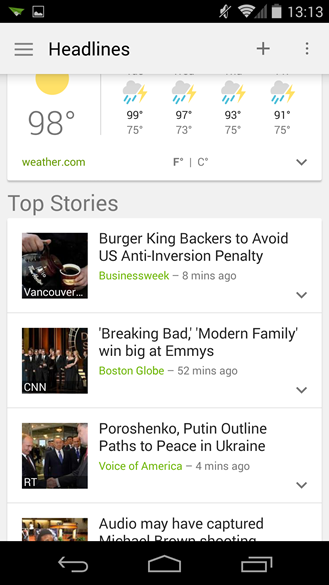 In the news sections themselves the format shifts. A tap on the headline will take you out to your browser app as usual, but expanding the story will give you the first couple of sentences, plus related news stories from a variety of sources, not unlike searching for something topical in a general Google query. You can expand any of the stories on the page, and tap the arrow button to open the share dialog. 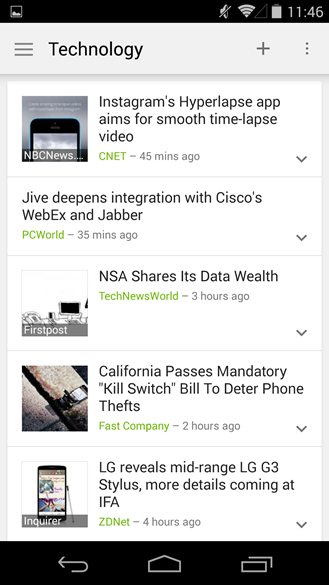 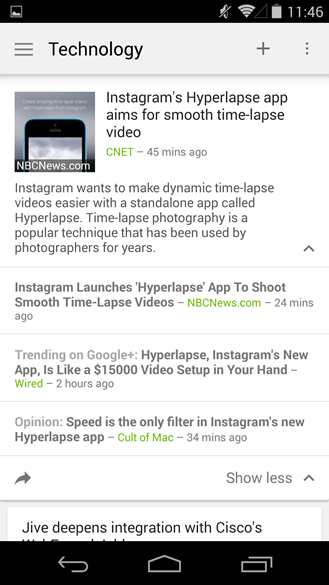 Swiping left or right moves you between topics as you would expect. Tap the hamburger button or slide in from the left side and you'll see an easy list of all your topics, plus the help menu. You can add topics manually from the slide-out menu, from the "+" button at the top of the app, or by tapping "manage sections" from the drop-down menu. There is no conventional Settings menu, but all the options are available from just about anywhere in the app. 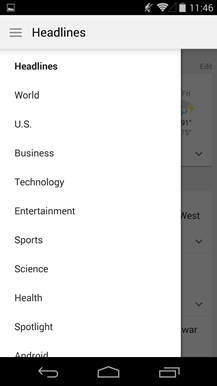 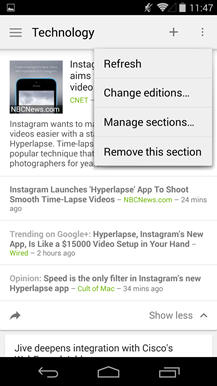 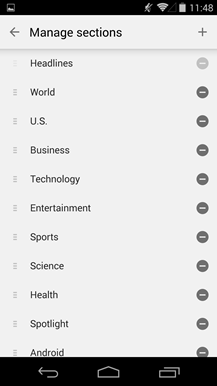 Other options include country-specific settings and, very cool, a Daydream for news stories. Thanks to commenter Joe for spotting it. 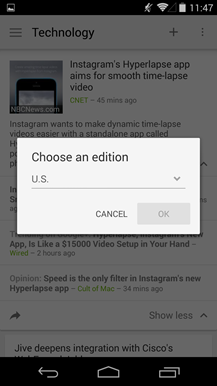 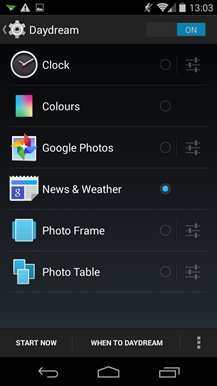 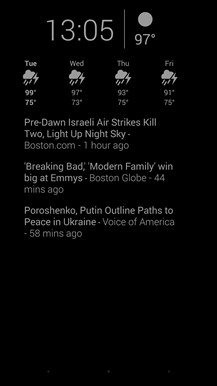 All in all, it's a great update to an app that a lot of people (including yours truly) have come to use daily. If I could add one thing it would be a dark theme, just because I've gotten so used to the dark news after relying on the old Genie widget for so long. A lot of people had assumed that Google had basically abandoned this little part of Android, and I'm thrilled to see that they were wrong.

Thanks, Frederico Silva and everyone who sent this in!

NPR One And Watch ABC Apps Get Chromecast Support