Back in December of last year, we took a look at the BACtrack Mobile Bluetooth breathalyzer, a police-grade drunk-o-meter. While we believe it to be pretty dang accurate, it's undeniably pricey at $130 (though it was $150 at the time of the review), which puts it outside of what most people are willing to spend on what can really only be defined as a novelty item.

Despite being "police-grade," BACtrack devices are not intended to be used as a metric for deciding when it's OK to drive.

BACtrack gets that, so it recently released a smaller version of the BACtrack Mobile, which it calls the Vio. It's more portable and much more affordable ($50), and we took it for a spin to see how it compares to its bigger brother. 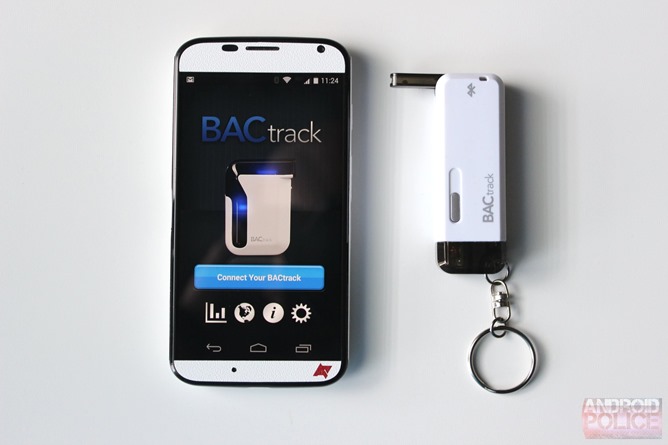 In short, it's not quite as accurate, but it's less than half the price and just as much fun. Grab a shot, and let's do this thing.

So the first thing to understand about the Vio (and how it compares to the Mobile) is the technology it uses to measure one's BAC. It uses something called MicroCheck Sensor Technology, while police-grade devices like the Mobile use a Fuel Cell sensor. The way each one works is drastically different from the other, but I'm not going to get into the gory details of each – BACtrack has already done all the legwork here, and offers a nice, easy-to-follow breakdown of sensor types on its blog. I highly suggest reading it before making a decision on which breathalyzer to buy. In fact, you should probably read it now. I'll wait. 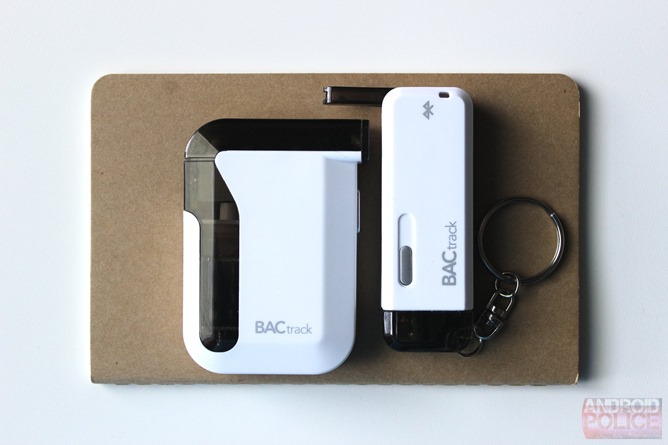 You didn't read it, did you? Fine. Just read it later.

Since I covered the BACtrack app in-depth back in December, I'm not going to focus on that too much, especially considering it's essentially the same. Think of this as more of an addendum to that review, just with a slightly different test unit.

For testing, I decided to go with a drink a little less awful than last time, and settled on Jagermeister Spice. It's 25% alcohol by volume, so it's also a little more tame than the Jim Beam Devil's Cut I drank while testing the BACtrack Mobile, which is 45% alcohol. I started drinking around 8:45 PM and tested every 20-25 minutes. It's worth noting here that a 15-minute window is required in between drinking and testing. This allows the alcohol that may still be on your breath to wear off, thus providing a more accurate reading.

I took two shots at exactly 8:45, did my first test at 9:06, and followed that with another shot. I used this same pattern throughout the night, testing first with the Vio and the Mobile immediately after. I documented my results each time for easier parsing when I sat down to write this review (Note: I referred to the Mobile as "Reg" in my documentation). Also, I just wanted to see how much sloppier my handwriting got as the night progressed. My goal was to drink until hitting 0.08% with the Mobile, which is the legal limit for driving in the U.S. 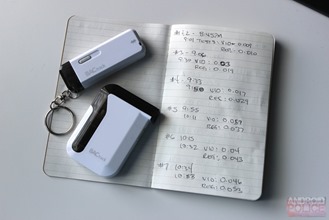 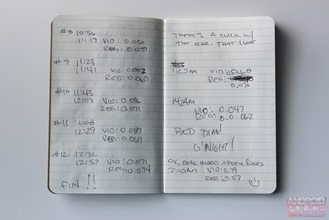 "There's a click with the [Mobile] that I love." It clicks when it's finished taking a reading. I like it.

In a nutshell, here's what I found: the Mobile is generally consistent and provides what I feel is a very accurate reading with each test. The Vio isn't far off, but results are a little more sporadic than the Mobile – one test may be high, and the next may be low (with drinks in between). Overall, it does a good enough job to mostly quantify how intoxicated one may be, but if you're looking for the most accurate results possible, the Mobile is the way to go.

I charted out my results with each, which really puts it all into perspective very well: 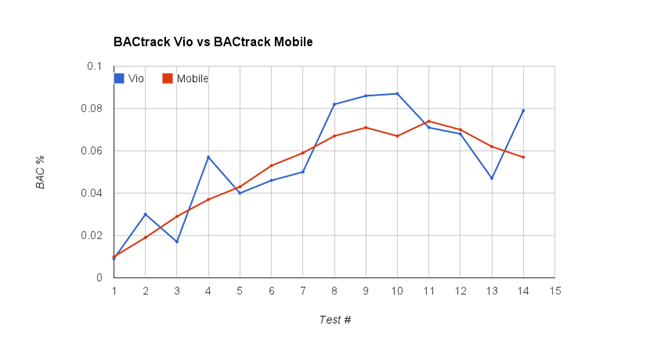 As you can see, the Mobile's results follow a pretty even curve, whereas the Vio is sort of all over the place. It's not a dramatic difference, and Artem and I both agree that it's still close enough to be acceptable, but the Mobile is the clear winner when it comes to precision. Again, though, it's also more than twice the price.

Of course, the Vio does have its advantages, like the time it takes to return results. Sometimes it takes the Mobile quite a while to provide any sort of numerical feedback, while the Vio seems to offer feedback almost instantly. If there's one thing drunk people love, it's instant gratification. 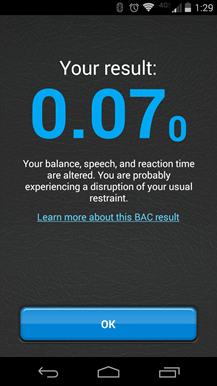 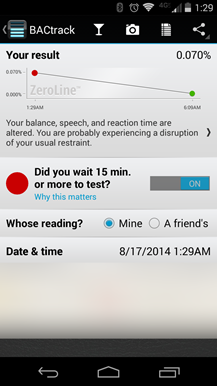 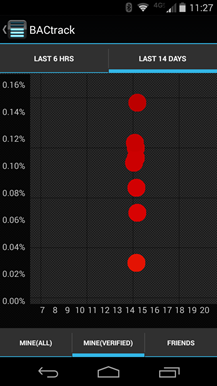 Overall, I really like the BACtrack Vio, and think it's worth buying for anyone who's looking for a cheap breathalyzer. I can't stress enough that this unit isn't designed to tell you when it's OK to drive, so here's a good rule to follow: if you've been drinking, it's not OK to drive. Just don't do it. Get a designated driver.

What BACtrack (Mobile and Vio) can do, however, is better help you plan your night by quantifying how intoxicated you are, as well as providing an estimation of when you'll read 0.00%. That can at least save you from getting too drunk and having a hangover the next day, providing you can show enough self-restraint to quit drinking once you've hit your limit (which is arguably the most difficult part for many people).

If you're in the market for a Bluetooth breathalyzer but don't want to shell out $130 for the BACtrack Mobile, don't hesitate to pick up the Vio. Have fun, and be safe.

Deal Alert: All Of SNK Playmore's Paid Android Games Are Currently On Sale For 99 Cents Each