Update 2: Amir Efrati, author of The Information's report, says Verizon is a lying piece of crap:

1/ Verizon playing a semantics game. $VZ is attempting to build a coalition of partners + a product that's more than traditional app store

Efrati goes on to write that they know for a fact Verizon has been probing carriers, OEMs, and developers about its own Google Play alternative. He also does some backpedaling of his own, though, having now decided that the Verizon project is a "long shot" (words never actually used in Efrati's piece, mind you - from a guy who does have a record of post-facto rumor revisions).

Between Efrati's conditional amendment and Verizon's denial of the store's existence, it's impossible to tell how serious Verizon is about this project, even if it does seem likely that they've been toying with the idea.

Update: Verizon is now flatly denying The Information's report, saying the company has "no plans" to pursue another branded app store. Either that or they quickly decided it wasn't a great idea after the cool reception the leaked service received.

Oh, Verizon. Your corporate evilness has almost become a loveable caricature in the world of wireless network operators, and on a seemingly monthly basis, you consistently reward us with more solid gold headline material. Today's too bad-to-be-false news comes from The Information (sorry, paywall), reporting that after apparently forgetting that VCAST was a thing, Verizon is going to try that whole "app store" deal again.

Unsurprisingly, details are light at this point, but Verizon apparently wants to focus its app store around a model of tailored app recommendations and - wait for the money - the ability for publishers and developers to advertise on the app store, something Google and Apple don't offer. 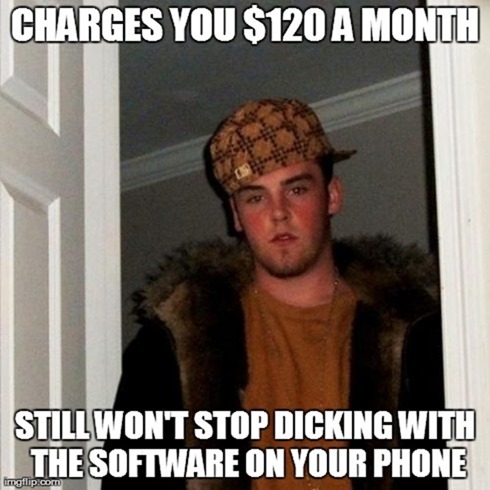 The store would be exclusive to Android - that's sort of a given - but it might not end up being exclusive to Verizon. The Information says big red is currently in talks with other carriers, along with phone OEMs, to try and get the platform off the ground. Verizon would also offer app developers access to "specific features" of carriers' networks - likely through a framework in said app store. One can only assume this means the Verizon Apps version of Spotify will tell you how many cents per minute streaming Anaconda is costing you alongside the track length.

Don't worry, it gets worse! Verizon is supposedly looking into making its store a more... immersive experience, using location and other data to provide you app suggestions. Presumably, this means Verizon Apps will encourage you to download an overpriced office suite when you go to Staples, or RunKeeper every time you're within 100 yards of a McDonalds.

Yes, the title is satire (note: this is mostly here for Verizon, the rest of you totally got it because you read Android Police). No, Verizon is not a person, or an animal, and cannot become intoxicated, despite US Supreme Court decisions regarding the personship of corporations that may be interpreted in such a way as to suggest that Verizon could theoretically get schnockered which I would love to see acted out in a T-Mobile commercial.

ZTE Announces Unlocked Nubia 5S Mini For The US, Available August 27th For $279