Buried in the press release announcing the Sharp Aquos Crystal on Sprint was the first official mention of Sprint App Pass. It's a subscription-based app store the carrier plans to pre-load on all its Android devices, and we have the full scoop on features thanks to some information we've been given. The gist of it is that you pay a monthly fee and get access to all the stuff offered by App Pass, but only for as long as you keep paying. 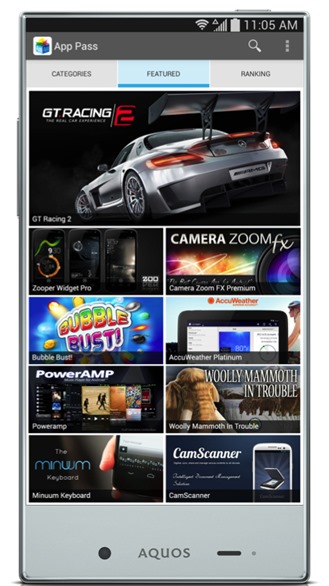 App Pass is backed by Mobiroo, which has its own subscription app store for other devices. The content included with App Pass will be different, though. Mobiroo is just responsible for the underlying platform (some of the slides we have use Mobiroo's store as an example of how App Pass will work). There's a 14-day trial for App Pass, after which it costs $5 per month to use all the apps in the store. There will be over 200 apps and games in App Pass at launch that cost money in Google Play like Camera Zoom FX and OfficeSuite 7 Pro. However, there will also be some freemium stuff, for which you get $5 of additional monthly in-app purchase credit. Of course, you can spend more than that (which Sprint would probably prefer).

The apps are going to be protected with DRM that ensures you can only use them with an active App Pass subscription. That subscription fee is shared by the developers of the apps you use. So if you download 10 apps from App Pass in a month, your $5 is split up between those devs. Sprint is pitching this as an additional revenue stream for developers, even if they're already successful in the Play Store.

The official Sprint landing page for App Pass isn't live yet, but it should be soon. The program is going live on August 29th, and the on-device client will be pre-loaded on all phones going forward (yay bloatware). It may even be added to existing phones in future OTAs. The same service is going to come to Sprint's parent company Softbank in Japan as well. It'll be interesting to see if App Pass helps to turn around Sprint's fortunes.