Update #1 (8/12/14): It looks like Google deleted the tweet embedded below. Between that and the lack of an update to this support page, someone might have pulled the trigger early. But if those countries don't have access yet, they probably will sometime soon.

Update #2 (8/19/14): After a false start last week, the Play Music expansion now seems to be live. The official Google Play country availability page has been updated to reflect this as well.

Update #3 (8/19/14): It seems like the previously announced Uruguay expansion didn't make it into this round, but Google decided to replace it with Venezuela. So we still have a list of 9 countries.

If you live south of the border from (most of) us here at Android Police, then south of another border or across the Caribbean, you've got more musical options today. Google announced that Google Play Music All Access is now available to nine new countries, and according to a bit of flag searching, those countries are the Dominican Republic, Ecuador, Guatemala, Honduras, Nicaragua, Panama, Paraguay, El Salvador, and Venezuela. Happy listening to our Latin American readers. 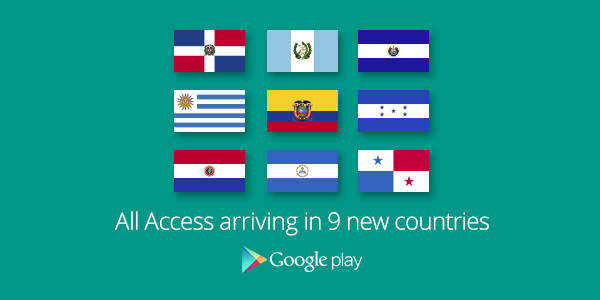 The option to enable All Access may not be immediately available to everyone in those countries, since the Google Play support page hasn't even been updated yet. But once the switch is flipped, those users should have access to a significant portion of music for unlimited listening and downloading on Android devices for the local equivalent of $9.99 USD. Remember that thanks to international music licensing, the song and album selection will vary from country to country.

The addition of nine new countries for All Access brings the total number up to 43. Before today most of those were in North America and Europe, with only Bolivia, Costa Rica, Chile, Colombia, and Peru representing Central and South America. The expansion comes shortly after Google returned to the controversial practice of limiting the number of device deathorizations for All Access to four per year.