Love it or hate it, the LG G3 is one of the top flagship devices of 2014. With a set of specs that will make even the most jaded Nexus warrior a bit jealous, it's no wonder that the handset has gained a few fans. Unfortunately, LG's software customizations still leave a lot to be desired, and many users have turned to rooting their phone to take back some level of control over the experience. A handful of root tools have come out with support for most of the US and international variants, but none of them worked across the board, and the Sprint model hadn't been cracked at all. That is, until Stump Root. Thanks to a new tool by Justin Case, IOMonster (thecubed), autoprime, and PlayfulGod, you're one button press away from rooting any US variant of the G3. 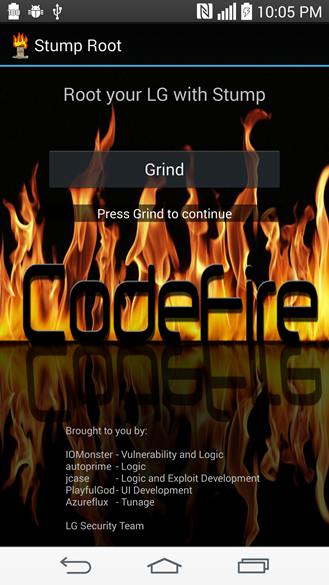 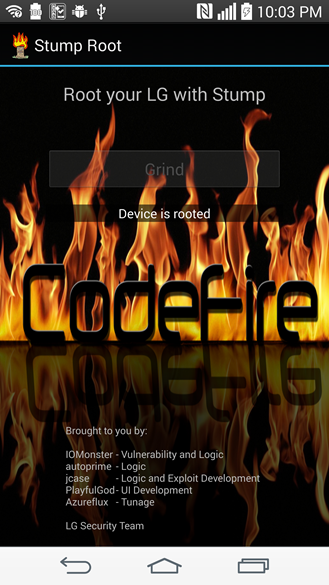 Note: Be ready for the app to launch into a chiptune by Azureflux that should totally bring back fond memories of playing Nintendo games into the dead of night... That is, if you're old enough to have enjoyed such experiences. Just know that it'll start playing right away, be ready with the volume button.

Installing Stump Root couldn't be easier. All you've got to do is install an apk, press a button, and reboot.

Here's a video of Stump Root in action, made by Justin Case.

Stump Root currently works on all US variants of the G3. The exploit it uses will probably also work on all of the non-US versions, but there's an implementation detail that requires customizations that may be added in subsequent versions. In other words, stay tuned and you might see an update with expanded support. In the meantime, there are alternatives for those other variants.

Also, before anybody asks, the app is already reported to work just fine on the ART runtime.

If you're dying to root your G3, and assuming you haven't already done so, what are you waiting for? Stop reading and go void your warranty while blasting the dulcet tones of Azureflux!