Meanwhile, Apple's iOS slipped further back while maintaining its second place spot at 11.7% of shipments (down from 13.2% last year), while Microsoft's Windows Phone fell to 2.5% compared to 3.7% a year ago. Windows Phone, somewhat surprisingly, even saw a decline in total units shipped, down to 7.4 million handsets compared to 8.7 million in the same quarter last year. That's definitely not a great sign. 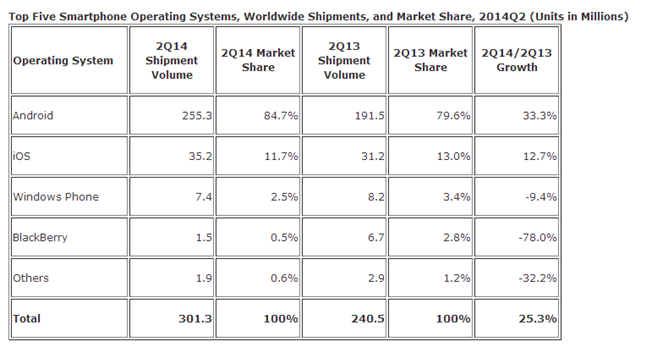 The most precipitous fall, though, came all but unexpectedly from BlackBerry, whose shipments have nearly fizzled out. The Canadian smartphone maker managed to get only 1.5 million smartphones out the door during Q2 this year, compared to 6.8 million last year - a decline of 78%. BlackBerry's market share fell accordingly, down to 0.5% from 2.9% a year ago.

[Deal Alert] Touch Of Modern Has Braven Speakers Discounted By Up To Half And A SunJack Solar ...