Amazon's flaming media streaming and gaming box is currently marked down to $84. This is a savings of $15 on the original price. The difference here isn't enough to get Fire TV detractors to change their tune, but if you were considering picking up Amazon's little black box, this might just help with the decision. 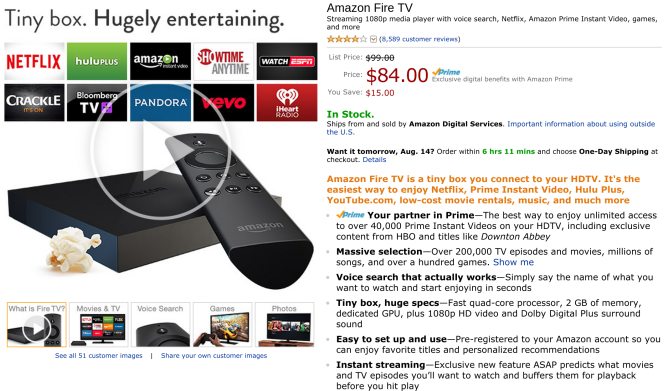 We've put the Fire TV through its paces in a lengthy review, and to sum things up shortly - it's not a bad box. You get your standard media streaming apps (including, obviously, access to Amazon Instant Video that most Android devices lack). You also get internal specs that put most set-top boxes to shame. At $84, it's a great deal for people heavily invested in Amazon's ecosystem, as the company's content definitely gets first-class treatment, and it's a marginally okay deal for everyone else.

Here's an Amazon link and one from Best Buy if you'd prefer to shop using PayPal or pick one up in person.

[Deal Alert] Buy Two Chromecasts From Best Buy, Get $15 Off