Last week, Google pushed out an update for Google Search, bringing the version number up to 3.6.13. While it added support for deep linking into apps and a few more of the bits to make hands-free operation a little more convenient, most people probably felt like they didn't get too much out of this update. As it turns out, we found one more addition that might interest a few more people. The best part is that it's probably ready to go as soon as Google pulls the trigger!

Sent From Your Computer

Google is preparing to send small scraps of text over the air that will appear in your notification shade for immediate action. There are still a few bits that we don't know, but it's pretty clear how this one works.

The evidence comes mostly from the code, but there are a few strings that comprise the basic UI.

The notification isn't particularly complicated, featuring only two lines of text. The title (the top line with larger text) comes from Google, and it's probably provided by you. The second line, "Sent from your computer," is from the built-in strings. If the notification is expanded, it will also show a pair of buttons: Copy and Save.

The cool part is that the notification is actually useful, assuming the text is of any value when it's there. Hitting the Copy button drops the line of text directly into the clipboard. The Save button fires up apps that have registered for "Note to self" intents. This will run either the default app, or show a list if no default has been chosen.

I've re-implemented Google's code in a sample app to show what the notification looks like. All of the strings and icons are from Search 3.6, along with the relevant code, which is very close to the original. In other words, the screenshots below are simulated, but they are not mock-ups, so this is exactly what it should look like if "Sent from your computer" goes live right now. 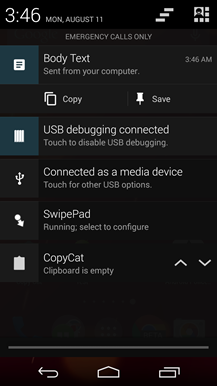 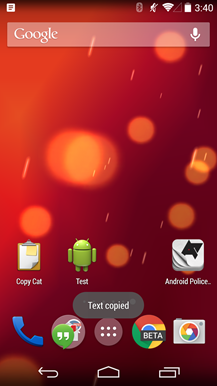 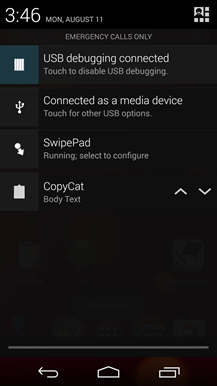 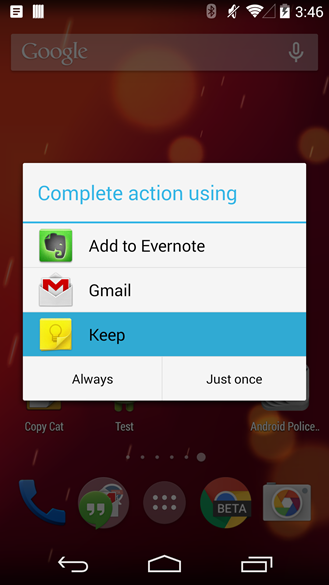 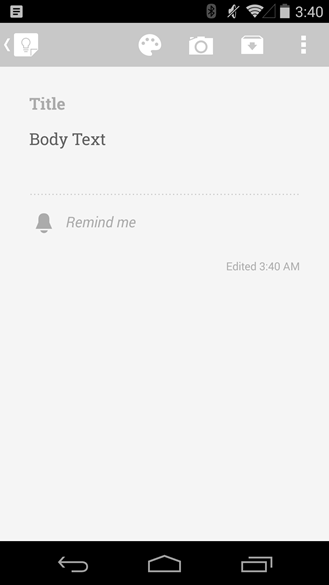 Left: tapping Save starts an app. Right: the content sent to the application.

The one question that remains is: what event actually triggers this notification? The only thing that's absolutely clear from the text is that the text originated from your desktop. That still doesn't tell us exactly which product is responsible for sending it or what action a user would take to activate it.

I'm just speculating, but I suspect this will become a new trick for the "OK, Google" hotword detection Google launched back in November as an extension, and subsequently integrated directly into Chrome earlier this year. Any number of Google's products could take advantage of this notification, but we'll probably just have to wait for an announcement. In fact, it's possible that both sides of this equation are already live and nobody has noticed it yet. But that's pretty unlikely since Search v3.6 still hasn't gone into a wide rollout. Google will probably wait until it's available to everybody before flipping the switch.

It's not some elaborate UI, there's no hyper-intelligent code consuming stacks of servers, this is just a push notification with a little bit of text and a couple of handy buttons. Hey, sometimes the best things really are that simple.

There's no telling how long we'll have to wait for "Sent from your computer" to start showing up in our notifications, but it appears to be ready for launch at anytime. Who knows, it might even happen today. At least I can hope, right?