In the chart below we see variation between the 2013 and 2014 versions of Samsung and HTC's flagships. The starkest void is noticeable on the S4, where T-Mobile pulled in 6 hours and 42 minutes compared to the 4 hours and 1 minute of the second-place competitor, AT&T. It's worth noting how, while the first place carrier is pretty steady, the carrier that places last varies. Verizon lags furthest behind twice. Sprint does once, as does AT&T. 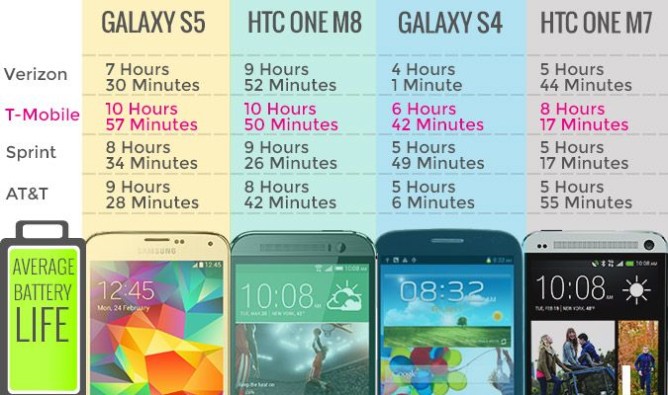 Two potential reasons for this difference come to mind. One, T-Mobile's network may be more efficient than others. This could have something to do with the way the network handles data or the significantly lower number of users relying on its LTE network. The second reason may have something to do with T-Mobile's hands-off approach to bloatware. The carrier tends to only supply one or two apps where some others see room for several times as many. That said, there could still be other variables at work here as well.

Laptop Mag's battery test consists of an app that cycles through fifty web sites, pausing for sixty seconds on each page until the battery craps out. Phones have Wi-Fi, Bluetooth, and NFC disabled so that they only use the carrier's network, and in each case the device receives at least three bars of service. For more details, check out the magazine's blog post below.

Google Search Updated To v3.6 With Support For App Deep Linking, More Signs Of Hands-Free, And ...