If you're a Google Shopping Express user, you may have recently received an email requesting that you participate in a survey about the service. Among the questions were many about pricing, including one which displayed the following chart detailing plan pricing options for the quasi-beta delivery system. The survey asks, essentially, if you'd be OK with this sort of cost structure - $90 per year (or $8 a month) for unlimited free "regular" and alcohol deliveries over $15, and $8 per order (rather than per store) of refrigerated goods under $150. 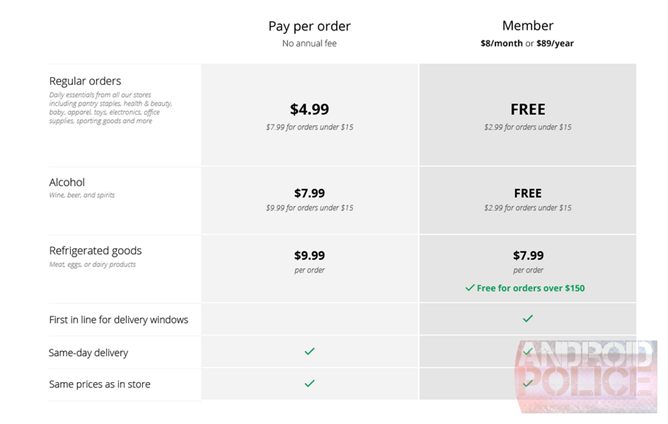 There are many grains of salt to be taken here, though. First, this is merely a proposed structure being presented to people taking a survey - it is hypothetical. Second, the survey itself asks for even more feedback about pricing (would you pay for refrigerated deliveries, etc.) and membership structure (monthly versus annual fee). The graphic above, though, lays out a pretty convincing model for the service - this seems entirely plausible.

The survey also revealed that GSE may soon be stocking fresh produce and refrigerated goods, two items it currently doesn't deliver (alcohol is only available in the SF Bay Area for now, and it launched quietly). Produce would seem to be of the prepackaged variety only - the survey proposed as much, suggesting GSE probably won't go down to your local grocer and pick out a good head of garlic and onions and bag them up for you. I have to assume the same will be true of meat, though one of GSE's big partners is Costco, so I'm holding out hope.

Not much else in the way of future info came from the survey, but these tidbits are certainly tantalizing. Again, though, anything could happen: GSE is pretty young as a product goes, and these changes could never come to be. That said, of the things that could happen, these are now far more likely than most to represent what GSE is going to look like in the months to come.

For now, Google Shopping Express does not actually charge for deliveries. That's because the service has only been around for a short time (less than a year), and current members are all either using a 6-month free trial of the service or, if the trial has expired, paying $5 per delivery per store. (I have to imagine Google has extended the trial for early Bay Area adopters, as I couldn't turn up any accounts of people actually paying for GSE after their trial expired.)

We know Google seems to be planning on spending a lot of money to expand Shopping Express around the US, and given that many early adopters' trials will soon be expiring, annual pricing announcements are probably inevitable before the year is out.

Google Just Rickrolled Me Via An APK Teardown, And I'm Not Even Mad