Google I/O 2014 has come and gone, but that doesn't mean great stuff from the conference isn't still coming out. The companion app used by thousands of attendees -and hundreds of thousands of fans and followers- has been open sourced! Code for the I/O app is meant to serve as an example of best practices for Android developers, providing fully functioning implementations of the latest design principles, UI controls, networking code, and more. 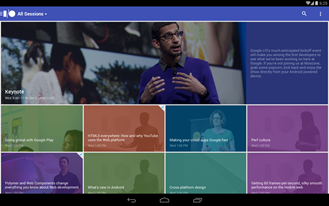 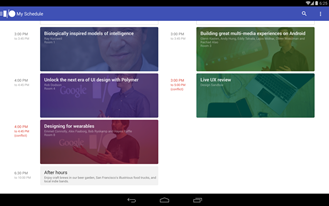 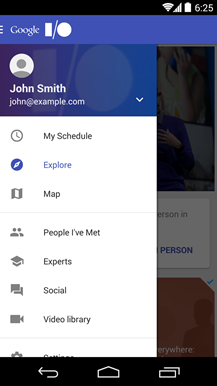 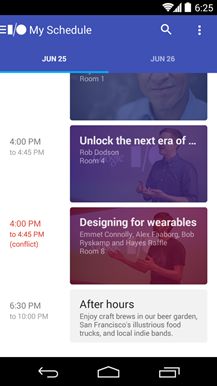 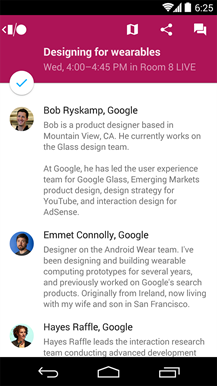 It has become something of a tradition to release the source code for the I/O scheduler app, although this is only the 3rd time it has been done. While it appears deceptively simple, it's frequently used to demonstrate creative ways to work with sensors and OS features that are generally underutilized by developers. This time around the app is featuring extensive cloud syncing through Google Drive and Cloud Messaging (GCM), preview APIs from Android L, and even an Android Wear companion app. The project also includes server-side code (intended for Google App Engine) that can be easily adapted for use with other conferences and events.

The I/O app is also one of Google's best platforms to urge developers in the direction of certain platform conventions and a particular design language. A burgeoning card-based style was demonstrated in the version released for I/O 2013, which was an iteration on the Holo-light look of 2012. This year, Google is obviously promoting the brand new Material design language, featuring bolder colors, fewer lines, smoother transitions, and subtle layers of depth.

If you're a developer, check out the announcement for more details, and head over to the github repository and poke around to your heart's content. This release is a fantastic example of a well-built and fully functional Android app, and many developers should find it useful in preparing for the major update coming later this year. For everybody else, feel free to hit the widget below to download and play around with the app; and for the fun of it, maybe take a look back through the Material Design guidelines. Keep up the good work, Google!

Verizon Releases The Gigantic LG G Vista And The Rugged Kyocera Brigadier, $99 Each ...