The Satechi CD slot mount is well worth a buy (oops, I was supposed to save that for the end, wasn't I?). Last week I went hands-on with the Kenu Airframe+, an AC vent mount that I absolutely loved. But some readers pointed us in the direction of CD mounts, a category I hadn't yet considered, and one that gives purpose to a part of my car that I otherwise would be just fine with leaving off entirely. If your CD slot also goes as unused as an old VCR, then this type of mount may just be the tool for you.

First thing's first, the Satechi CD slot mount is not a brand new product. It goes for 16.99 on Amazon, and it's far from the only product of its kind. But it was the one recently recommended to us, and after spending some time running the product through its paces, there's little reason not to give it a little attention. I'm happy with it, and so is Artem. 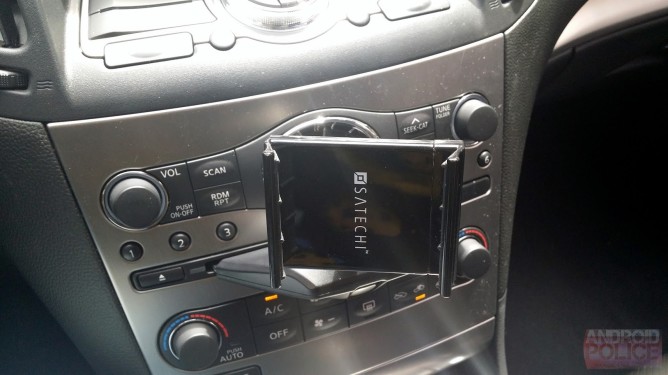 As the name suggests, the Satechi mount plugs into your car's CD slot. The primary advantage of this type of navigation tool is that it's easy to move as needed (unlike windshield mounts) and doesn't block up something that gets a lot of use (such as AC vents). Obviously, this isn't the case if you're someone who actively uses their CD slot. For you, this may be more hassle than it's worth when there are so many other ways out there to place your phone in easy view while driving. But for many other people, a CD slot mount may just serve as the least intrusive option. 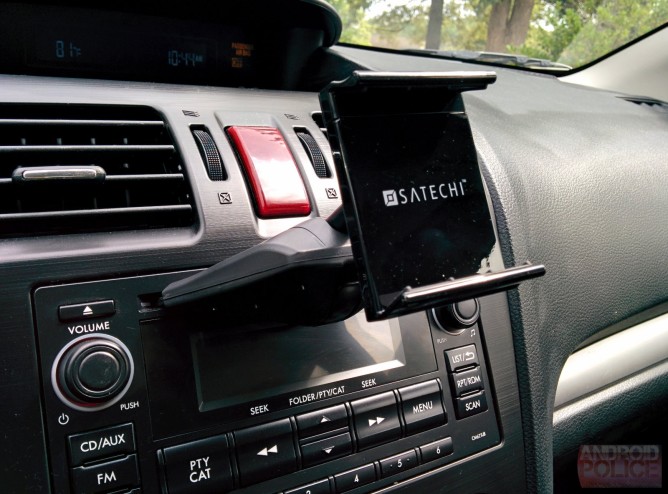 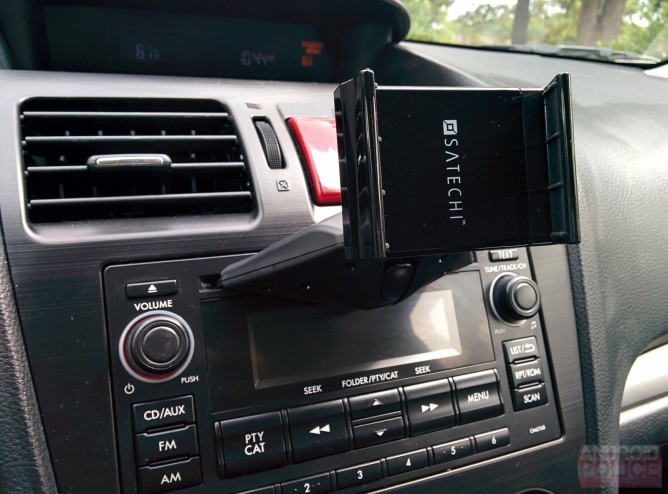 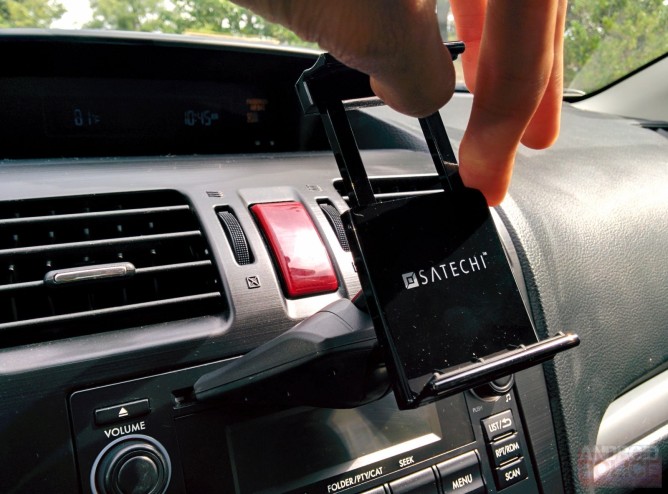 The Satechi CD slot fits very snugly in my car out of the box, but it comes with three rubber pads of varying thickness so you can adjust as needed. A rotatable clamp holds your phone in place, and it expands out to accommodate phones up to 5.5 inches wide (though it could probably hold even larger phones, such as the 6.4-inch Sony Xperia Z Ultra). As you can see below, it's able to manage a beefy device like the OnePlus One just fine. 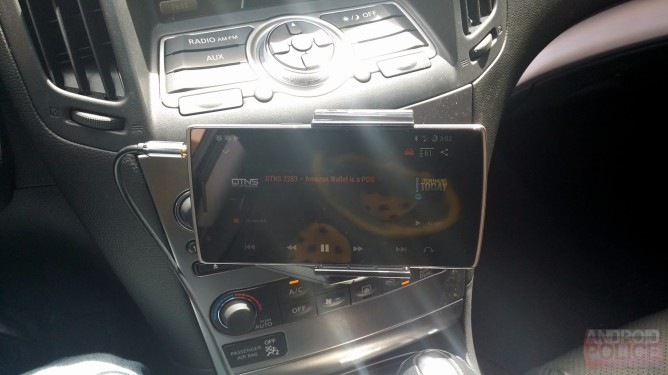 Both the clamp and the swivel it's attached to are rotatable 360 degrees, allowing for more options than just the typical portrait and landscape orientations that most of us will default to anyway. Yet this extra mobility serves well for those times when just tilting the screen slightly can drastically reduce glare. It also enables a passenger to pivot and interact with the device without having to remove it from the mount. 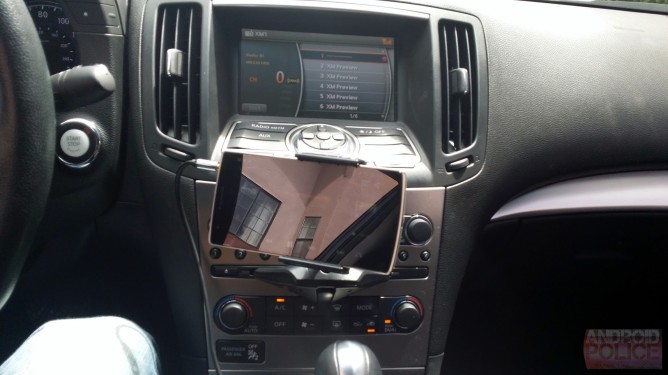 This type of mount introduces several potential issues, but these are primarily a matter of preference. For starters, the CD slot may be placed somewhere low where it's not in easy view. In Artem's photo above, the OnePlus One is left in a position significantly lower than his AC vent, whereas in my car the difference in height is pretty negligible. In Artem's car the CD slot mount also causes his phone to block the clock behind it along with several radio controls, whereas in mine it's not blocking anything I particularly care about while driving. A CD slot's location is simply just going to vary more in vehicles than AC vents, dashboards, and windshields. 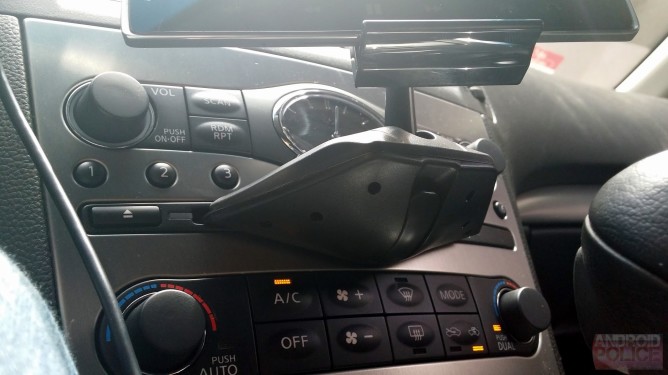 Compared to the Airframe+, the Satechi mount is roughly four times larger. The base and the clamp are both larger than Kenu's product, resulting in something that simply is going to be less portable as a result. It's not particularly an issue if you're just going to leave the mount in the glove compartment, but you do lose out on the option of storing the accessory in a pocket or, heck, a pencil pouch. This makes it less convenient to switch between vehicles or travel with for use in a rental car. Yet at the same time, it's still more portable than your typical windshield or dash mount. 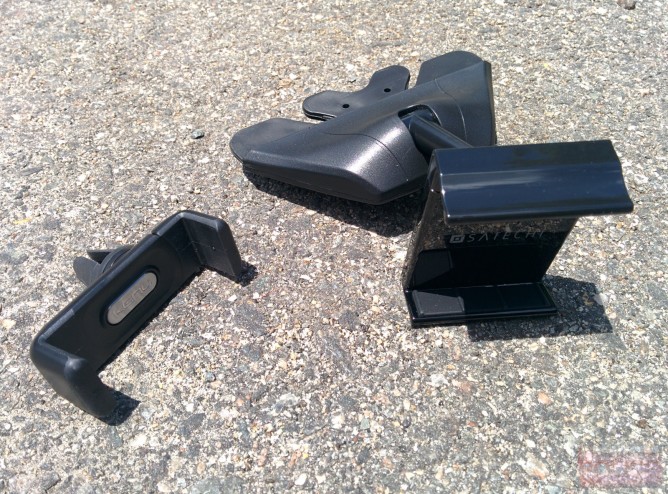 By and large, the Satechi CD slot mount is a win. It held onto my phone tightly regardless of how I drove, and it both offered a better view than I've ever achieved with an AC mount and was more accessible than something on the windshield or dash. There's no one-size-fits-all product when it comes to these things, but if the idea of putting that CD player to good use has piqued your interest, this product gets my recommendation.

As I mentioned before, Satechi's mount isn't the only option out there. Caseology offers one that looks largely identical. Mountek sells a similar product, along with a magnetic alternative that also slips into the CD slot. All of these hover in the area of $20. I can't say whether Satechi's offering is particularly better or worse than any of them, but it definitely gets the job done.

TuneIn Radio Pro Price Jumps From $3.99 To $9.99 Without Explanation

Google Search Can Now Check Your Hotel Reservations, Find Things To Do, And Steer You Back With ...