In an angsty blog post today eviscerating the prices AT&T and other carriers charge for family plans, T-Mobile CEO John Legere announced that his company was going to provide customers with even more bang for their buck. From July 30th through September, the carrier will offer a family of four up to 10GB of data for $100. For people who sign up during this time, these rates will last until 2016.

T-Mobile generally provides each line with 1GB of data at that price, but this plan will bump that up to 2.5GB, making this is a discount somewhere in the ballpark of $30 a month (T-Mobile's site doesn't yet allow customers to sign up for 2.5GB of data a line, instead jumping from 1GB to 3GB, making the closest equivalent I can work out 3GB + 3GB + 3GB + 1GB for a total of $130 a month). Here's the chart T-Mobile has provided to show how its deal compares to the competition. 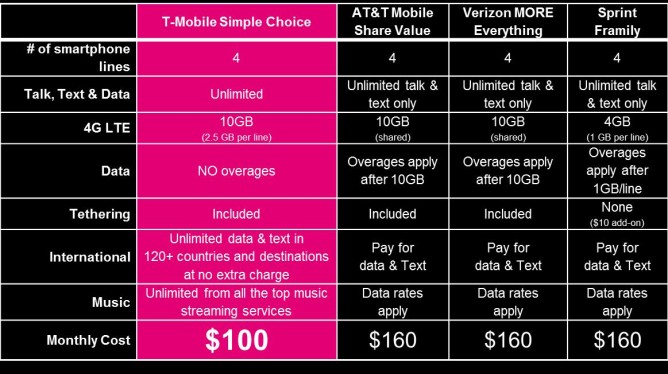 Of course, there are many different variables that can throw a monkey wrench in this chart. Bringing your own device and not signing a contract can reduce monthly fees, and rates can move in the opposite direction depending on how rapidly you opt to pay off a subsidized device. This comparison also doesn't take into account how important coverage is, with T-Mobile's savings not doing a lick of good in less populated areas where its connections are less competitive.

But the smack talk isn't what's important here. What matters is the chance to get the same T-Mobile service for less than you would otherwise pay. That really is a simple choice to make. LG Aims High With The Tab Book, An 11-Inch Tablet-Keyboard Combo Powered By An Intel Core i5