Update: An LG representative has informed us that the Tab Book can be purchased with both Windows and Android in an optional dual-boot configuration. There are no plans to release the product outside of Korea, at least for the time being.

LG's current Android tablet strategy is a little baffling. They jumped back into Android tablets with the admirable G Pad 8.3 last year, a well-equipped device with a premium build and a premium price. Then they launched the G Pads 7, 8, and 10.1 this year... with the usual plastic bodies and specs well below the first one, aiming at the budget market. Now LG is shooting far above even the most expensive Samsung tablets with the Tab Book, a device that looks like a super-premium Windows machine that just happens to run Android instead. 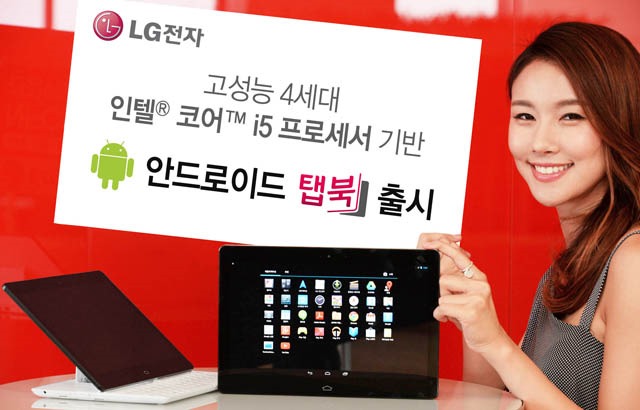 First of all, the Tab Book is running Android x86. That's getting more and more common these days, but all the standard tablets and phones we've seen using Intel hardware so far have opted for Atom processors, which are cheap and low-power compared to the company's main line. The Tab Book uses a full Core i5 processor, the 4200U Haswell to be precise. It's also got a massive 4G of RAM, an 11.6" 1920x1080 display, a 128GB solid state drive, and USB 3.0. And if that sounds like the specs of a laptop, that's basically what it is: the 1-pound device has a sliding, tilting keyboard that tucks up underneath the screen when not in use.

It's essentially a gigantic take on the original DROID, though this particular configuration isn't all that uncommon with modern Windows devices. Liliputing reports that the Android-powered Tab Book is probably a slightly modified version of an existing Windows product, the Tab Book2. You can even see a physical Home button on the machine, despite the virtual navigation bar. For all that power, LG's spec sheet says it's running Android 4.2.

The Tab Book has been announced for LG's home market of South Korea, but currently there's no date or price. I wouldn't expect it to come out of the Asian markets until the design and consumer reaction have both been tested.

Modern Combat 5 Review: A Mobile Shooter Loaded With An Extended Magazine Of Caveats