It's never a bad thing when phones get the latest version of Android software, and Motorola seems committed to sending it to their devices sooner rather than later. After the usual Verizon soak test a couple of weeks ago, the updated ROMs are ready and apparently flying out to both the high-end Moto X and Verizon's customized CDMA Moto G. If you don't see the update alert in your notification bar, you should sometime over the next few days. 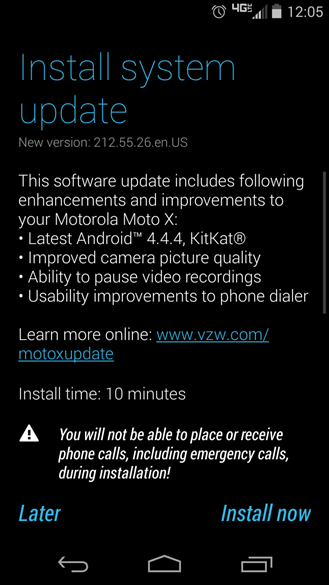 The jump from 4.4.2 to 4.4.3 is sizeable, but that last bump to 4.4.4 is just a couple of security patches. You can read about them here and here. Verizon says that the updated software includes improved photo results in fluorescent lighting and the ability to pause video recording on the Moto X, as well as an adjusted dialer. (If it's similar to the 4.4.4 build on my DROID MAXX, it's not the Nexus-style dialer.) The Moto G gets the same improvements plus a built-in copy of Motorola Alert, according to this Motorola support page.

Those who have rooted their phones may have trouble upgrading and/or lose root - check your favorite user forum for advice on advancing to the latest build. That's where you'll probably find the ZIP files for a manual flash as well.

The Information Reports "Shamu" Is Indeed A Motorola-Made Nexus Phablet