Big things are happening for the smallest of Android devices. Over the last month, we've seen several attempts to extend the capabilities of Android Wear, some have worked out, while others haven't fared so well. Most of the activity has come in the form of 3rd-party apps, so there hasn't been much action for dedicated modders. That is, until today. Team Win just posted its first official custom recovery for the LG G Watch (dory). Say goodbye to your warranty folks, the age of ROMing your wristwatch is upon us. 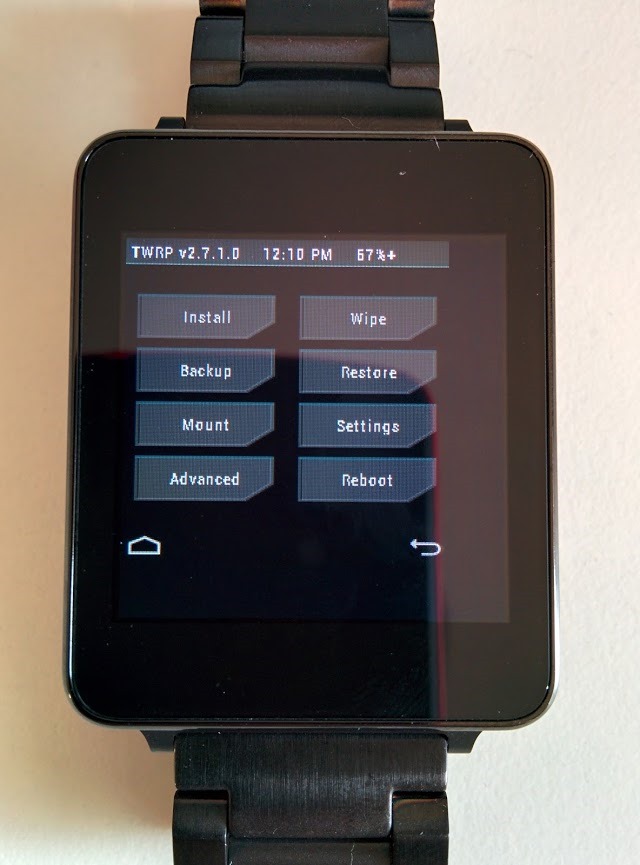 As you can see from the picture, the default TWRP theme isn't quite optimized for such a small screen, so those of us with larger digits will have to be careful. The interface will be a bit easier to use once the buttons are resized to reach the right and bottom edges of the display; and scrolling support wouldn't be a terrible idea, either. Still, everything is certainly usable, especially with a good stylus.

Android Police is not responsible for any damage done to your device. We only take credit for the good things that happen.

Unlike the stock recovery image, TWRP supports debug mode, and all of the other standard functions appear to be working normally. Installation of the TWRP custom recovery is pretty simple, but it does require an unlocked bootloader (instructions available here). Just download the latest image from the Team Win site, reboot into the bootloader, and flash the image to the recovery partition.

Update: Thanks to the efforts of XDA Recognized Developers Dees_Troy and Adam Outler, Team Win was able to add the Samsung Gear Live to the list of supported devices later the same night. Like the G Watch, the TWRP theme is undersized for the screen resolution, but an improved version will probably come out fairly soon.

All we're waiting on are a few good custom ROMs and we can really get the party started! Now, if we could just get that AOSP code...