There's been a lot of confusion lately over the fate of Google's Nexus program. Rumors swirled, after LG's planned Nexus was canceled (and later denied entirely), that the program was dead in favor of an upcoming Android Silver initiative. With the revelation that HTC is working on a 9" tablet device (code named Volantis), it seemed the Nexus program had at least one more device in store - expected to launch with Android's L release this fall. Then, during an interview at Google I/O, Dave Burke appeared to confirm that Google was still invested in the Nexus program, suggesting there might be another Nexus phone coming after all.

We've also been seeing plenty of rumors concerning Motorola's efforts with the "X+1" phone - including full-on hardware shots of a device suspected to be the phone. What we didn't expect, however, was that Motorola may be working on another device - for now code named Shamu, that may indeed be a Nexus phone. We've received information suggesting this is the case, with just a few additional details. Given the fact that this is a hardware rumor, we're going to treat it like other rumor posts, assigning it a confidence rating before breaking down what exactly we've been told.

This rumor gets a confidence level of 6.5 out of 10. Points are deducted simply because hardware plans can change very quickly, even when a prototype device already exists. We are confident that Shamu is a real device under active development, and fairly confident that it is a contender for the Nexus program, but are just slightly less confident about its specs, simply due to the information at our disposal.

The rumor this time is simple - according to information made available to us, Motorola is working on a device with Google code named Shamu. The device is supposed to be targeted at major US carriers, and unspecified carriers in other parts of the world, which would probably include the markets that currently have access to Nexus devices, though this detail is still unclear.

The phone is supposed to carry a sizable 5.9" display of unknown resolution, and - interestingly - a fingerprint sensor. It will also allegedly be targeted for a November release. The release time frame is - as always - not something to place bets on. It can change very quickly depending on a variety of factors.

Unfortunately, we don't have source images to share regarding Shamu. The source information provided to us is not something we feel comfortable sharing in its original form, and we are not fortunate enough to have even a placeholder render as we did with the Volantis tablet. That said, we feel confident in the information we were provided, and it isn't as though Shamu has been cut from whole cloth - the device has made at least one appearance in Google's issue tracker (thanks Mark for spotting the report). Here is the original issue. Below is a screenshot for posterity. 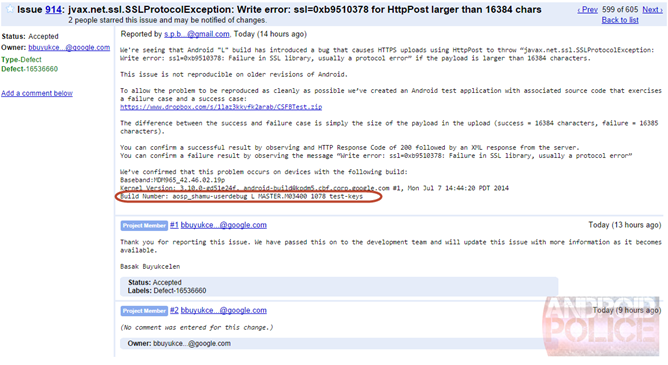 While we aren't yet confident enough to say Shamu will definitely materialize as a Nexus phone this fall, we can make an educated assertion. Besides the fact that our information mentions Volantis and Shamu in tandem when referring to Android's L release, the device is currently running a Google-built kernel, something that is definitely not an established pattern for non-Nexus devices.

It is note-worthy that the person who submitted this issue did so from a Gmail email address, not from an official Google address, but the subset of individuals who would know about the device called Shamu and would go to necessary lengths to fake the information presented and have the issue accepted officially by Google staff is imperceptibly small.

Update: After further research, we've learned that the entity who reported the issue above was Spirent Communications, a company that essentially tests devices for errors just like this. Spirent also has a Play Store catalog containing some test apps.

There's also the fact that its codename is Shamu - Google's Nexus devices typically have codenames in reference to sea-faring critters, from tilapia to maguro (sushi tuna) to hammerhead.

Ultimately, we'll have to wait a few more months to find out if Google is really planning on launching two Nexus devices with Android L. But evidence seems to be mounting that we can expect a tablet, and with new information that Motorola might bring forth a (rather hefty) Nexus phone, it looks like the Nexus program might be perfectly healthy after all.