Update: The Android version of Shazam has now received this update as well. Here's the new changelog posted to the Play Store.

This release brings full track playback in Shazam, powered by Rdio. Once you’re connected, you can play any track and carry on listening to the music as you discover more in the app. Shazam a song to get started. 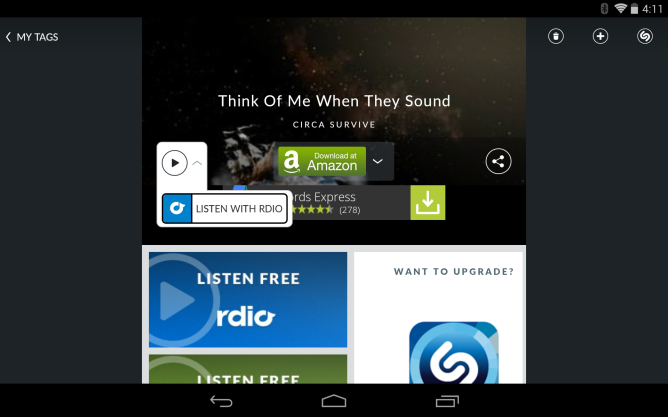 Shazam, the company whose app uses a phone or tablet's microphone to identify a song or TV show, has partnered with Rdio to offer users full in-app song playback. Previously Shazam kicked users out to a separate app to check out the track. Going forward, people with Rdio subscriptions won't have to deal with such disruptive behavior. 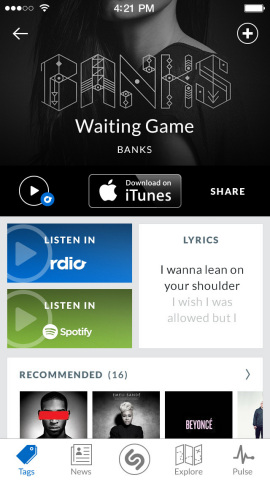 The integration doesn't stop there. Thanks to recent updates, the app automatically creates an Rdio playlist consisting of the tracks that users have Shazamed. Additionally, there's an "add to playlist" button listeners can tap to manually select where a song should go.

The new in-app Rdio playback is available for iOS today, but Android users will have to wait a bit to give it a go. The update is set to roll out in a few days.

NEW YORK & LONDON--(BUSINESS WIRE)--Today, Shazam® announced a major update featuring supercharged streaming that allows users to go “beyond the preview” with full song playback, currently powered by Rdio. This feature further establishes Shazam as a hub for effortless music exploration by allowing users to enjoy the music they discover without leaving the app.

“Shazaming a song is just the beginning of a listener’s journey,” said Daniel Danker, Chief Product Officer for Shazam. “Now, in partnership with Rdio, fans can listen to the music they discover without even leaving the app, making Shazam a terrific place to enjoy great music.”

Your Shazamed Tracks: A new automatic playlist feature that creates a list within Rdio of all the tracks a user has Shazamed
“Add to Playlist” button: Allows users to choose additional Rdio playlists into which they can put the songs they Shazam
Fans who aren’t subscribers will be prompted to install Rdio from the App Store.

“We are thrilled to be the first streaming music service to power Shazam’s new in-app song playback,” said Chris Becherer, SVP of Product at Rdio. “This partnership helps us deliver on our promise to be everywhere music is being discovered.”

The update also includes enhanced Facebook sharing. It’s now easier than ever for users to share songs they discover on Shazam as well as to invite friends to download the app and share their own discoveries.

This update is available today on iOS, with an update for Android launching in the next few days. Additional streaming services to be added and announced in the coming weeks.