Earlier this month, when we recapped all the rumor and leak posts we had published leading up to Google I/O, hands-free functionality called Android Eyes-Free (codenamed KITT) was marked as "partially live." For those in need of a refresher, our post outlined in-car functionality that would carry a stripped-down interface, notifications read aloud by Google, and a new hand-waving gesture used to wake the device.

While the hands-free hotword functionality has already debuted, the dedicated in-car interface, void of any visual chrome, has yet to be revealed (or even really hinted at) by Google.

But a small tidbit spotted in one of Google's promotional gifs today might give us just a little more hope that the functionality is still in progress.

Luckily for us, the gif is based on a rather poorly-edited screenshot which - besides attempting to cover up the L status bar with a KitKat status bar - reveals a dogfood Photos icon, and another icon labeled "Google Hands-..." (presumably "Hands-Free") with fitting steering wheel imagery. Take a look at the gif and the still shot side by side: 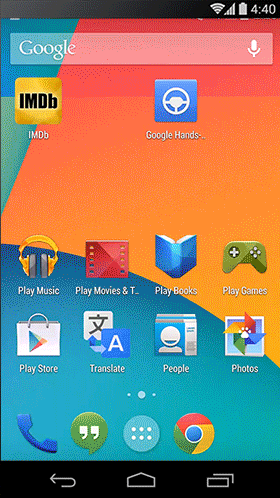 The icon is clearly still a boilerplate and likely not the final design, but the fact that it's here, on what appears to be an off-the-cuff screenshot taken hastily for this promo gif, suggests that Google's planned in-car functionality is indeed still being worked on. Hopefully we'll hear or see something official soon.