The Amazon Fire phone is interesting for a number of reasons. It's the company's first attempt at a smartphone. It crams Fire OS into a smaller form factor than it's had to accommodate before. It has five - yes, five - front-facing cameras, four of which serve as the backbone for what Amazon calls Dynamic Perspective. One thing the phone is not interesting for, however, is being a good deal (more on that below). Nevertheless, it's now available for purchase from Amazon and AT&T. 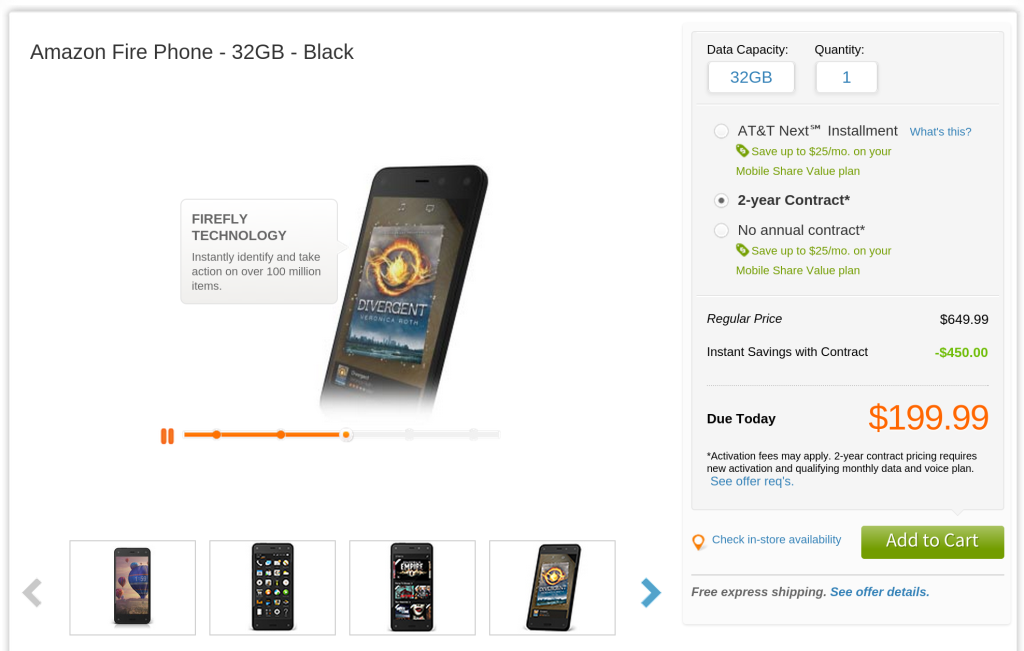 That's a lot of money for a phone comparable to the Nexus 5 in specs, but one lacking access to Google's significantly larger supply of apps. For that price you could snag two more powerful OnePlus Ones (assuming, of course, that you can find two OnePlus Ones to snag).

But if you're heavily invested in Amazon's ecosystem (apps, Kindle Unlimited books, Prime Music, etc.), or you want access to those Instant Prime Videos that you still can't watch using traditional Android devices, then there's reason to give the Fire phone a go. It also comes with a free year of Prime (an extra year, if you're already subscribed), which is a rather enticing perk if I do say so myself.

Fire is available for purchase today at AT&T locations nationwide or online at www.att.com/firephone or www.amazon.com/firephone. You can also take advantage of myAT&T online or via the device app to buy online, pick up in store, or schedule an appointment in AT&T retail stores.

“We can’t wait for customers to experience Amazon Fire for themselves,” said Ian Freed, vice president, Amazon Fire. “Fire offers an amazing value for customers with innovative features like Dynamic Perspective and Firefly, access to Amazon-exclusive content and services, including Mayday, ASAP and more –plus premium hardware with 32 GB of memory –twice the amount leading competitors offer, as well as free, unlimited photo storage in the Amazon Cloud and 12 months of Amazon Prime included.”

“Fire pushes the boundaries of innovation, and is easy-to-use,” said Jeff Bradley, senior vice president – Devices, AT&T. “Amazon has a vast content ecosystem that consumers know and love. AT&T has built a reputation of offering innovative devices with great pricing options – all on the nation’s most reliable 4G LTE network. Together, we’re thrilled to offer a device that will be as dynamic as its name.”

The AT&T Next program lets you purchase Fire with:

For a limited time, Fire includes a full year of Amazon Prime and 1,000 Amazon Coins (a $10 value) to use on apps, games, and in-app purchases. If you’re already a Prime member, your membership will be extended an additional 12 months.7 With Amazon Prime, customers enjoy two-day shipping on tens of millions of eligible items in the U.S., along with unlimited streaming of movies and TV episodes with Prime Instant Video; unlimited streaming and download on more than a million popular songs with no ads from Prime Music; and borrow one book a month for no additional charge with no waiting; and no due dates from Kindle Owners’ Lending Library. Data charges apply.

[Deal Alert] All But Two Of Disney's Sixteen Paid Games Are Going For 99 Cents On Amazon (Ten ...