Just as promised, HTC is starting to update the One M8 Developer Edition to Android 4.4.3. The over-the-air update was first spotted by a member over at the XDA-Developers forum, who incidentally was rocking a developer edition of the device. According to forum posters, the update file is for both the developer edition (M8_UL_CA) and SIM unlocked (M8_UL) phones, though none of the latter seem to be getting the OTA at the moment. If you're too impatient to wait for the staggered rollout, someone has already uploaded the nearly 600MB update ZIP at this link. 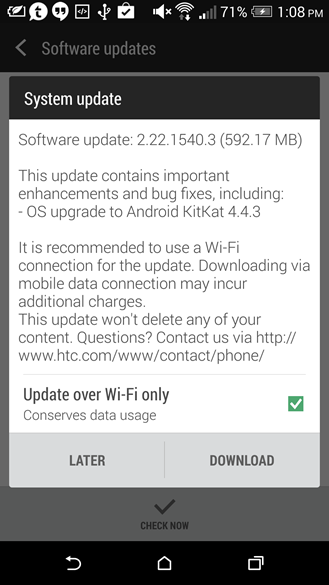 Screenshot via XDA user hamdir. Clear your notifications, hamdir, they're driving me nuts.

An HTC vice president told customers on Twitter last week that the update was incoming. He also had a strange answer to the question, "why not 4.4.4?" Apparently HTC has rolled the few security updates that make up the .0.1 version jump into the 4.4.3 update file. Why they didn't then bump the Android version number is a mystery, but the same HTC executive said the next over-the-air update would be for Android L. The company has already committed to sending the Android L update for the One M8 within three months of the code being published, whenever that happens to be.

As always, users with root permissions and/or custom recoveries on their phones (which might be a lot of those Developer Edition owners) should be aware that they might not be able to flash the update, and might lose root if they do. American carrier customers, except for those lucky dogs on Sprint, will probably be waiting a few more weeks. Or months. You know how it is.

Source: XDA-Developers - thanks to everyone who sent this in!

P.S. There's a guide on the XDA forum for manually changing a SIM unlocked M8 into a developer edition M8 with a little MID hacking. That should get you the update a little faster.