Update, 7-25-14: A Carnegie Mellon representative informed us that in fact the Duolingo Test Center results will not factor into determining an applicant's English skills, it will merely be used in research to test the exam's effectiveness, at least at the moment.

Carnegie Mellon, a global research university that attracts student applicants from around the world, is the first academic partner of Duolingo for the English language certification exam.    In this role, the university in the coming year will encourage applicants and newly admitted students to take the online exam as part of a research study. The exam results will not be used as the basis of admission decisions during this period; rather, CMU would perform research into the stability, reliability of the test and its correlation with TOEFL iBT, an established English proficiency test.

Duolingo has proven to be a popular and surprisingly effective way to learn a new language thanks to its unique game-style lesson system. But the learning that the free app provides is unofficial - it's certainly useful for providing basic language and vocabulary, but claiming completion of a Duolingo course as linguistic fluency on a job or school application is probably a bad idea. Today the company is taking steps towards more traditional language certifications in a surprisingly user-friendly way.

Duolingo Test Center was quietly launched on the web and Android (surprisingly, not iOS) in beta a couple of months ago. It's essentially a more formal version of the English learning version of Duolingo, and allows users to earn a certification after completion. Normally proctored English certification courses cost $200 or more, and must be taken at specific testing centers. Duolingo is hoping to lower the barrier to entry for students and job-seekers with a test that's relatively cheap ($20) and can be taken on any Android device or desktop browser.

The test is proctored like a conventional certification test. You'll have to supply a photo of your driver's license, passport, or national ID card, and a real live person at Duolingo uses your front-facing camera to match up your identity and prevent cheating. During the timed test, your face needs to be visible to the proctor at all times, and you can't pause, look away from your phone, or wear headphones. The questions on the test are more or less like the familiar writing, speaking, and fill-in-the-blank exercises in the main Duolingo app, albeit timed. According to the promotional material, the test takes about twenty minutes. The test charge is made via a Google Play in-app purchase. 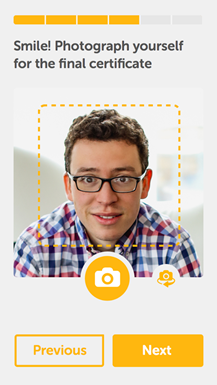 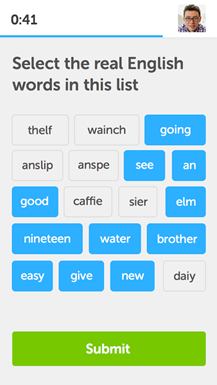 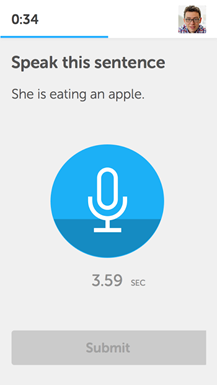 At present Duolingo Test Center is only being offered for people seeking an English certification, which makes sense as a beginning second language. (Duolingo is an American company, after all.) Right now Carnegie Mellon University is the only school accepting the Duolingo English Proficiency Exam as a substitute for standard certification exams [ed. note - see update above] - that probably has something to do with the fact that Duolingo was founded by a CMU professor and grad students. Freelance marketplace oDesk is also accepting Duolingo Test Center certifications as valid evidence of English skills. Duolingo is working with the Costa Rican government to offer the English testing program to students on a wide scale.

The utility of the certification are undeniably limited at launch, but if more institutions begin to accept it, Duolingo could become a popular alternative to testing centers. If it takes off, it's a safe bet that the company will expand into certifications for other languages. 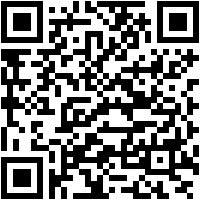 Pittsburgh, PA (July 23, 2014) – Duolingo has announced the launch of its language certification exam to give every job seeker and student around the world a chance to apply for life-changing opportunities.

The popular education platform has focused on providing free access to language skills previously reserved for a select few. Now, Duolingo is giving everyone a way to prove their language proficiency – a necessity when applying for jobs or schools – through a mobile app.

For decades, the language certification industry has been comprised of a small number of corporations that charge fees representing up to an entire month’s salary for some test takers. Many are also forced to travel long distances to examination facilities available only in select major cities.

The Duolingo Test Center app was created to allow anyone to certify their English skills from home, on their mobile device, and for only US$20 – that’s less than one tenth of the price of similar tests, regularly priced at US$250. Even buying a new smartphone and taking the Duolingo test will provide a more financially viable option for most.

Existing language certification tests are unfortunately susceptible to cheating. Bribing proctors and memorizing test questions are known practices, giving an advantage to those who can afford to circumvent learning. This results in the acceptance of students or employees who do not in fact have the required proficiency in English.

For these reasons, the Home Office in the UK recently suspended acceptance of popular standardized English tests required for visa purposes: http://www.theguardian.com/uk-news/2014/feb/10/student-visa-tests-suspended-fraud

The Duolingo English Proficiency Exam was designed to provide accurate, highly reliable results. The computer-adaptive test varies based on a test taker’s performance, so it takes 20 minutes to complete (instead of the 2 hours required by similar tests) and questions are rarely repeated. A remote proctor monitors the experience via video from the device to ensure nobody receives unauthorized assistance.

An independent study conducted by the University of Pittsburgh has found that the Duolingo English Proficiency Exam scores are stable, reliable, and substantially correlated with the TOEFL iBT total scores (a standard English certification test).

“Carnegie Mellon is excited that we will be Duolingo’s first academic partner,” said Subra Suresh, president of Carnegie Mellon University. “We admire Duolingo’s bold vision to create an affordable and reliable app-based test for English language proficiency that will allow more young people around the world to pursue higher education at CMU and other English-language research universities. CMU looks forward to working with Luis von Ahn and his team on research projects that will continue to advance the Test Center’s already impressive performance.”

Duolingo is also working with the government of Costa Rica and the “Ideas en Acción” organization to distribute the proficiency exam across schools to help reduce costs for students.

The Test Center app is available exclusively for Android at launch and can also be accessed on the web. An iOS app will be available soon.