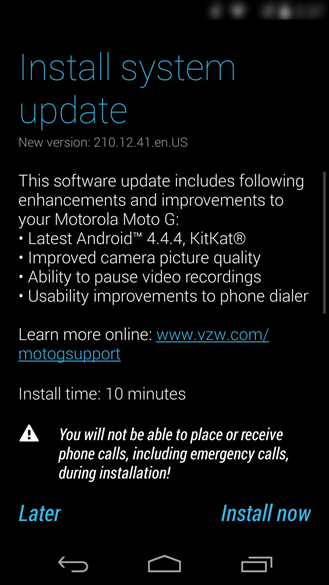 A soak test is basically a release candidate for phone firmware, which allows manufacturers and carriers to iron out any last-minute bugs before sending the update to the wider user population. Usually Motorola sends invitations to soak tests via its customer forum, asking users not to mention it to anyone else. Lately that hasn't worked so well - over-the-air ZIP files tend to be disseminated on other forums like XDA-Developers long before the general OTA update is sent out.

Both phones were already running Android KitKat, so the switch to the newer firmware will probably result in minimal user-facing changes, though there's a lot going on behind the scenes. Check out our coverage of 4.4.3 and 4.4.4 to see what's new. If you're not among those in the soak test, expect the standard update before too long.

HTC: Unlocked One M8 Phones Will Receive The 4.4.3 OTA Next Week, Next Release Will Be Android L